Where's the smoke coming from now?

One key thing that we need to get smoke out of the air is to stop putting smoke into the air. So where is the smoke coming from now? Here in Washington we have some active fires although the map of Washington below is somewhat misleading as only a few of the fires shown are producing significant amounts of smoke. Three fires in the state were listed as showing moderate fire behavior today including the Big Hollow, the Inchelium Complex, and the Cold Springs fires. The others including Whitney, Fish, Apple Acres, Pearl Hill, Sumner Grade, Customs Road, Babb, Manning Road, and Evans Canyon are listed with minimal fire behavior so they are not smoke free but are unlikely to be making significant contributions to our impaired air quality outside their local area. 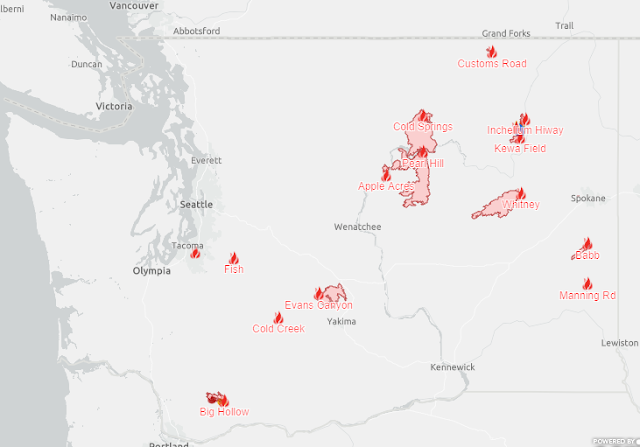 But to the south in Oregon there are numerous very large fires that are actively burning and sending smoke north to Washington. The northern group of fires including Riverside, Beachie Creek, and Lionshead, plus a few small ones nearby have a combined size of nearly 500,000 acres and are burning in heavy timber, slash, and brush fuel types. But that’s not all, numerous other large fires stretch the length of the Oregon Cascades and into California. Recent wind conditions have been moving smoke from these fires to the north and right towards us. The smoke layer has actually resulted in cooling many of the fires somewhat although as the smoke begins to thin out somewhat the fires are expected to become more active. More smoke, less fire, less smoke, more fire? It sounds like an unfortunate cycle. 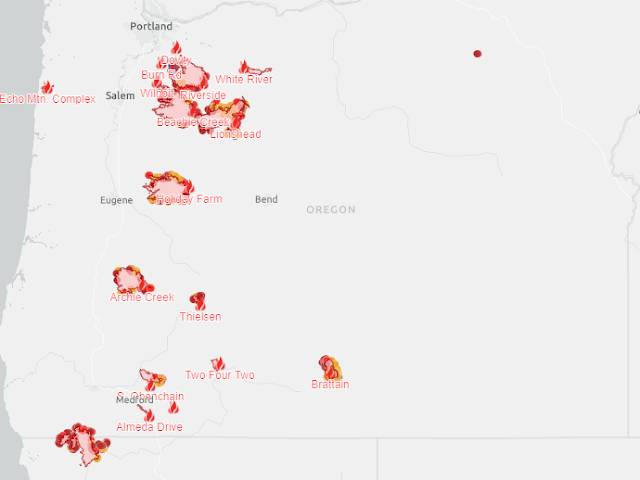 But on the horizon, arriving Thursday and lasting until Saturday, there is a prediction for enough rain in the Oregon Cascades to tamp these fires down considerably. Will they go out? No. And the farther south in Oregon you go, the less the rain will result in significant suppression of the fires. But the hard work of the firefighters combined with an assist from the weather gods should result in a pretty decent reduction in smoke production by later this week. Let’s hope so!