Is this the worst smoke we've had?

My colleague Dr. Beth Friedman crunched through statewide fine particle pollution data and prepared these plots comparing this year's smoke events against the last 5 years. The y- axis of the plot below shows the % of time all sites in the state recorded air quality in each of the stated categories. Monitor downtime and operating schedules have been accounted for. Only levels corresponding to an exceedence of the federal standard are shown for clarity. 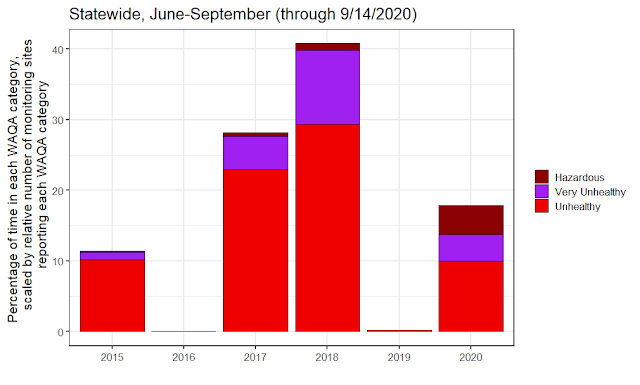 Washingtonians have not spent as much time breathing compromised air this year compared to 2017 and 2018. We had a late start to the wildfire season this year. However the amount of time we have spent breathing Hazardous air is unprecedented. Even if we look as far back as 2006, we don't see Hazardous conditions occurring for anywhere as long.

Next question is where those conditions occurred (you guessed it: everywhere). Beth mapped out how different areas in WA compared against each other, by averaging concentrations from the highest 3 days for each site this September. The size of the circles is number of days greater than the federal standard. 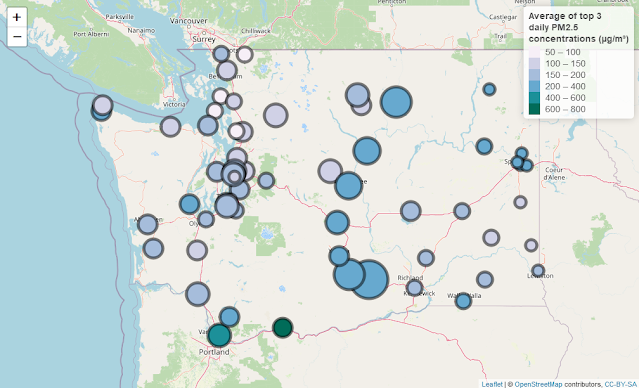 Seems like southern Yakima county followed by parts of Okanogan County had the most number of polluted days this month, but the worst air was recorded in the Columbia River Gorge and Clark County. Northwest and southeast WA had the "cleanest" and fewest bad days, respectively.

Take home message: Not the longest we've had to endure crummy air, but this is the dirtiest air we've had to breath as a state. And the season isn't over yet.