Have you tried out the new Fire and Smoke Map that was mentioned in the previous post (map available at: https://fire.airnow.gov/)? It's got lots of new information about fires and air quality that has never been available all in one place before including official state air quality monitoring devices (circles), temporary monitoring devices (triangles), and low cost air sensors (squares) all color coded by EPA's NowCast to show the severity of smoke impacts. It also has information about current named fires (flame icons) and satellite detected "hot spots" (glowing dots). Click on any of these icons and you'll get more information. There's also a layer that shows smoke plume extent (note that the smoke plume may or may not be at ground level).

The image of Washington below shows that we have a few fires burning around the state although for now air quality is mostly Good. The exceptions are the Omak area where smoke from the 6,000 acre Palmer fire is causing impacts, and some light impacts in the Clarkston area from the 1,400 acre Chief Timothy fire (this fire is now 100% contained). The gray shading across the eastern part of the state is an elevated plume of smoke coming in from the south and is likely a combination of smoke from Oregon and California. 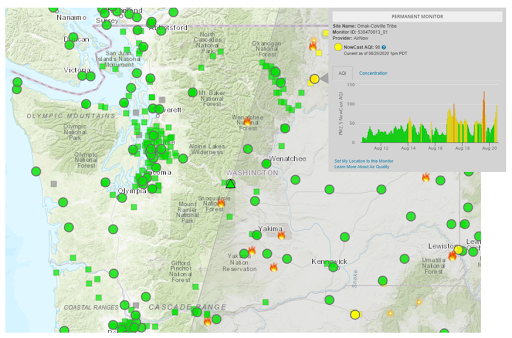 And speaking of California, they are experiencing some very serious and widespread fires and smoke impacts right now. Check out the image below. Yikes! (If you do try out the map today and find it a bit sluggish, we think it's from all the "hits" coming in from folks impacted by the smoke from these fires.) 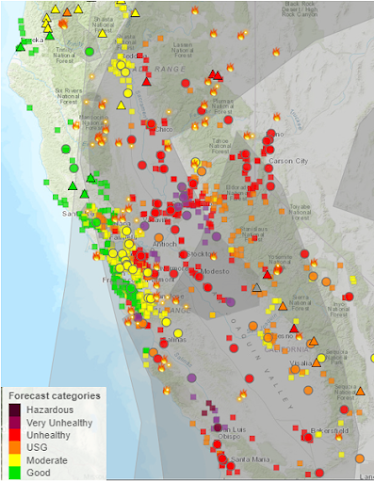 Another plus of the new map is that that it's been designed with mobile devices in mind. The following explainer shows you how to get the information you need. Click here to download the image below for a more readable version. 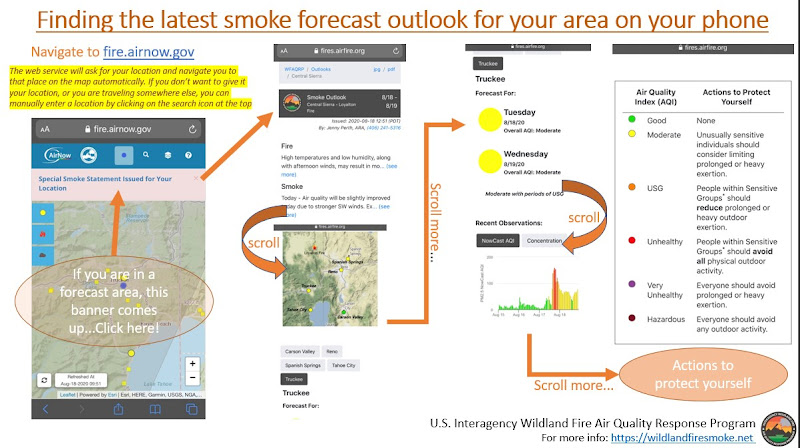 As temperatures approach triple digits in western WA on Sunday and exceed that in eastern WA through Tuesday, we're also looking at some smoke impacts in places. And possibly some ozone in two known hotspots.

The Mosier fire in Wasco County, Oregon is currently sending light smoke into south central WA and causing some Moderate air. As surface winds turn offshore tomorrow, assuming the fire continues to puff, we could see some smoke drift along the gorge toward Portland/ Vancouver and cause air to degrade to Moderate. The current smoke forecast model is a bit pessimistic for Saturday. No reason to suspect that most of eastern WA will see Moderate air tomorrow. It should be mostly restricted to the gorge and the south central Cascades. Other fires in north central WA could cause occasional Moderate conditions elsewhere.

Here's the most likely smoke forecast for the whole weekend. 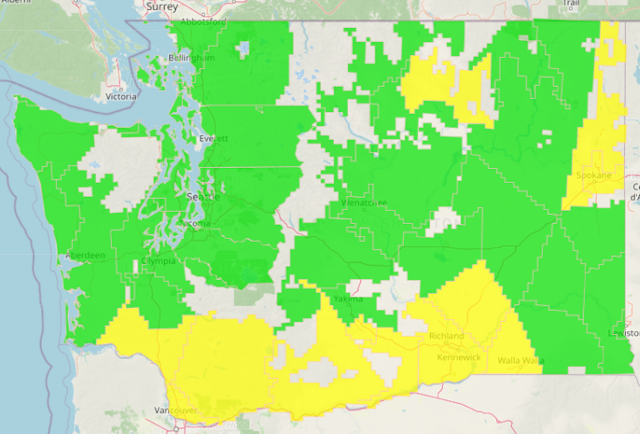 Upper level flow turns south by Sunday and models are suggesting some smoke from norther California fires could be transported over western WA by then. Not expecting much of it to mix down to the lowlands, but those views of Mt Rainier might not be that clear, and sunsets might be a bit more resplendent.

Siberian smoke hanging around the Gulf of Alaska is mostly expected to get shunted to our north. Not much of it is mixing down to the surface anyway.

EPA has partnered with the US Forest service to make available data collected nationwide (mostly by citizen scientists) using PurpleAir sensors. These sensors are known as "low cost sensors" for a reason, and they are not able to match the data quality and accuracy of permanent sensors. So while they often help fill data voids, there are a lot of caveats with their use.

EPA & USFS worked with states around the country to develop conversion factors to transform PurpleAir data to better match up against permanent monitors in near-real-time. Corrected data are now available alongside the rest of the fine particle pollution (PM2.5) data. PurpleAir monitors are shown as squares. Here's a snapshot of the short explanation on the page.