Mamma mia! Here we go again? Not so fast.

There has been some speculation that another bout of Californian smoke will overrun western WA again this week. Thankfully, it now seems like those concerns are a bit overblown.

What does the latest satellite picture (10:20AM today) look like? 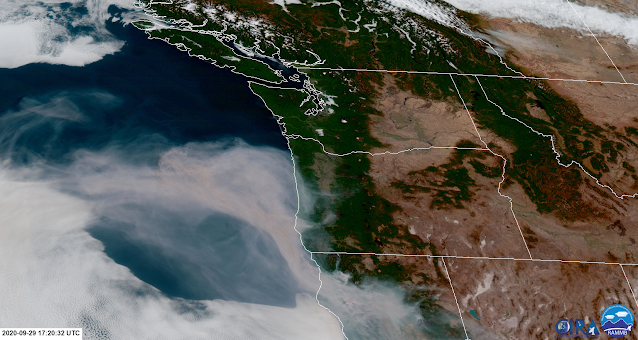 Smoke is indeed traveling northbound along the Oregon coast now.

What do the models say?

They have their own opinions, some with more merit than others. Discussing with the National Weather Service offices and air quality agencies, we feel that the HRRR smoke model injected too much smoke into the air and is trying to offload a generous portion of that in our backyard. We're not buying it. Most other models are (i) working with less smoke and (ii) keeping a lot of it aloft. This is consistent with satellite imagery, ground based air quality monitoring data and the vertical temperature structure of several models.

Here's what different models think the mixing heights in Olympia will be for the next 72 hours. Black line is the mean of them all. 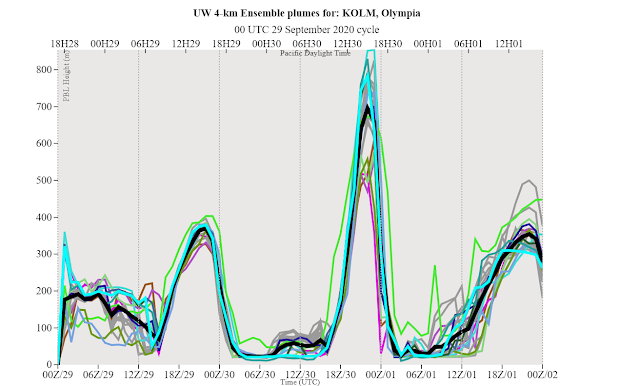 This means vertical mixing through the atmosphere is confined to a shallow layer, ~400m today at most, 700m max tomorrow and back to about 400m on Thursday. Most of the smoke will be 1-3km above us, so we won't be tapping into the overhead smoke reservoir all that much.

This is a good example of a temperature inversion working in our favor by not allowing smoke aloft to mix down. But inversions also trap pollutants released at the surface within a shallow layer, so we still have to deal with our own gunk in addition to whatever little smoke mixes down.

Will the smoke aloft interfere with Aurora Borealis viewing?

Probably, but there needs to be a good aurora. We returned home disappointed at 2AM this morning and tonight's geomagnetic activity is expected to be no different than yesterday. If a faint glow does appear low on the northern horizon, the smoke will filter some of it out. Going to higher terrain won't help much.