The Olympic Peninsula has pretty much cleared out now, and several Puget Sound area sites are trending downward. Rain is helping a bit, but the weakening inversion is helping most. Still on track to see mostly Good to Moderate air in western WA by tomorrow.

Just for kicks, take a look at how some sites in the Olympic Peninsula responded yesterday when a low pressure system offshore initially helped ventilate the area and then dragged in smoke from Oregon fires. Who said smoke dynamics aren't complex! 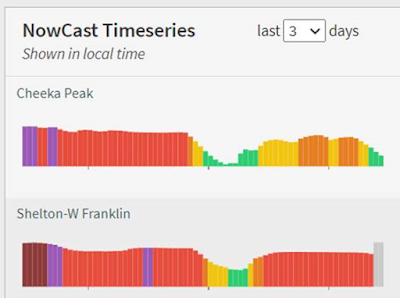 Most monitors in eastern WA have been pretty static today (read: Unhealthy to Very Unhealthy air) but cross Cascade winds are starting to pick up and will eventually make their way into the Columbia Basin overnight. Eastern WA will start seeing seeing improvements on Saturday, reaching Good to Moderate by Sunday.
We're nearly theredone for now. Don't be fatigued with the health precautions.
FYI, Ecology's air monitor in Yakima will be taken offline later today due to renovations happening at the host facility. But our staff proactively installed a temporary monitor in Union Gap, so there is no gap (no pun intended, honest!) in data coverage. Data should start appearing on the above map very soon.

As an agency dedicated to protecting air quality in our state, we’ve been trying to wrap our minds around not just what the numbers are this hour, but what the longer impacts of this kind of smoke storm may be.

As we’ve moved from one record-poor air quality day to the next, we’ve shared some charts and analyses as we work through those questions. One important takeaway is that more Washington communities have been exposed to more hazardous levels of particulate pollution than we’ve ever seen since we began monitoring for PM2.5 (the most concerning type of particulate pollution found in wildfire smoke) back in the early 2000s.

Geographic extent is just one way to look at it, though. Sometimes, we have quite serious wildfires that don’t affect many people – either because of helpful weather patterns that blow the smoke away, or simply because they are burning in thinly populated regions.

Ecology researcher Beth Friedman looked at how many Washingtonians have been exposed to extended periods of unhealthy air, compared to other recent smoke events. Looking at the smoke exposures this way helps us contrast this year’s smoke storm with other major events like 2018, where smoke from Canadian wildfires bathed much of our state with a longer period of less-intense air pollution.

So how does 2020 measure up when we account for populations in smoke- impacted areas? It may not surprise you that 2020 is a stinker: The number of people exposed to very unhealthy or worse air quality for a week or more is practically off the charts compared to 2018, 2017, or 2015. 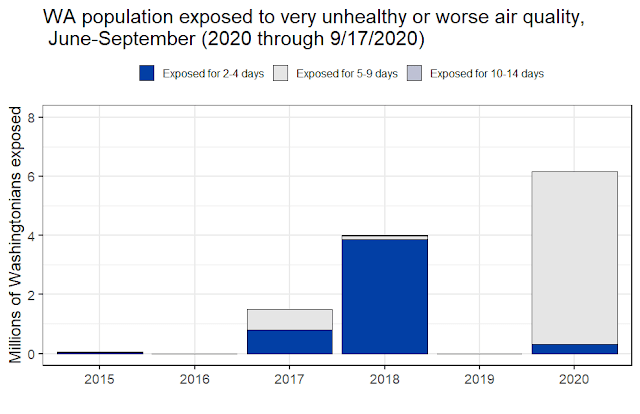 Or if you want to include the Unhealthy category in the comparison: 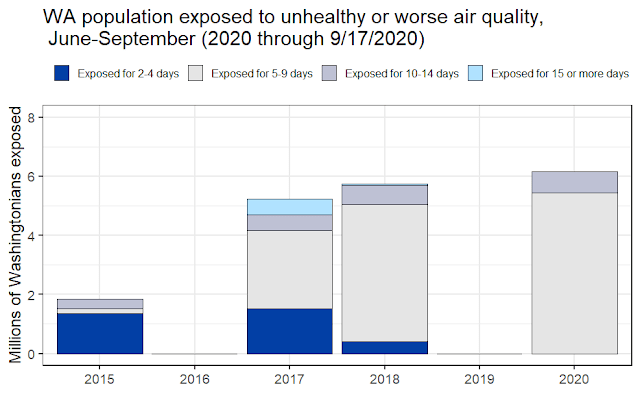 Clearly, this has been an incredibly bad week for Washington’s biggest cities – and it hasn’t been a walk in the park for our less populated areas, either.