Where are you when we need you most, O clean marine air?

"I'm already there. Take a look around. I'm the shadow on the ground".

OK that doesn't help. But its true. Fog around parts of the Puget Sound confirm that marine air did get through the Chehalis gap overnight. The trouble is there's still plenty of smoke over the coastal waters which the marine air is dragging along with it. But this morning's satellite images show where the silver lining is, and how the vertical smoke column over WA is thinning. 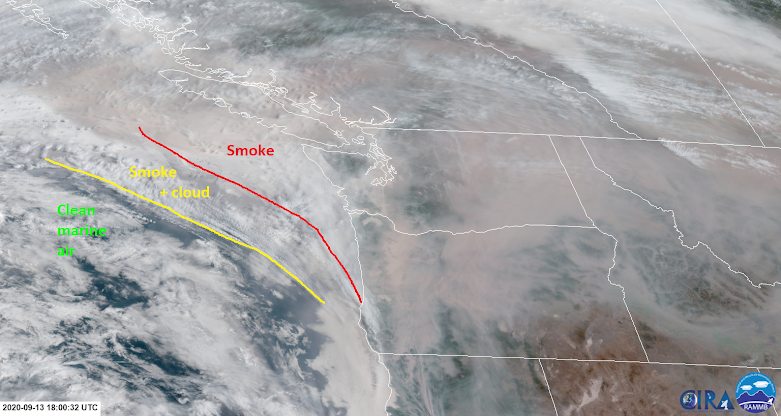 Ground level smoke is not going to erode as fast as we'd like, however. It will be Monday before much of western WA and the central and northcentral foothills of the Cascades see substantial relief. For far eastern WA, plan for little relief before Tuesday. I wish I had better news for areas around the Columbia River Gorge that will be directly downwind of some monstrous Oregon fires.

Check the forecast map and plan accordingly. As has been the case since Friday, our best advice is to remain indoors and hunker down.

Some of Ecology's monitors in eastern WA are not reporting data to the map above because the high readings are being automatically invalidated ("nah, that's erroneous data, no way it can be so high --> trash & blacklist!"). We've just convinced the algorithm to come to terms with the bitter truth and these data should start to appear on the above map shortly. Ecology's monitoring data dotmap has been current, however.

An aside: I've received questions from folks who're wondering why Ecology's map shows Good air quality in some areas, when everything else nearby is crummy. Thats because the default view of the map shows all pollutants being monitored, not just fine particle pollution (PM2.5, aka "smoke"). Ozone and sulfur dioxide levels are low, so sites monitoring just these pollutants show up as Good. Click on the "PM2.5" tab to filter these out.