First, there is no major infusion of wildfire smoke into Western WA. Satellite imagery shows hardly a cloud or wisp of smoke over the last 3 days. However several fine particle pollution monitors have been showing air in the Moderate to Unhealthy for Sensitive Groups range.

The ridge of high pressure over the state giving us this extreme heat is also responsible for forcing air downward and trapping pollutants within a shallow layer. This is known as a subsidence inversion. Since winds are relatively light, all the pollution generated by human activities tends to accumulate over time. But that's not all.

Trees also emit organic gases such as terpenes and isoprene, more so on hot days. These pollutants of biogenic origin undergo various complex chemical reactions in the atmosphere, giving rise to small particles known as Secondary Organic Aerosols (SOA). "Secondary" because the aerosols are not released directly from sources but formed as a result of subsequent physical and chemical processes in the atmosphere. The diurnal nature of the elevated pollution levels over the last few days are consistent with how we expect biogenic SOA to behave. A WSU air quality model is showing the same thing. 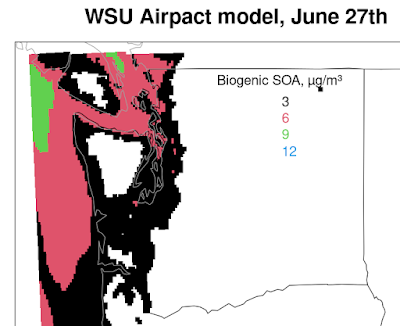 Biogenic emissions are also one of the ingredients of ground level ozone, aka "smog" formation. They react with oxides of nitrogen (mostly from traffic and industrial sources) under the right meteorological conditions to form ozone. All those factors came together yesterday and will do so again today to cause high ozone levels in the Cascade Foothills of King and Pierce counties. Expect air to be in the Unhealthy for Sensitive Groups or even Unhealthy range on account of this. An Air Quality Alert is in effect.

Skip the tech talk. When will it go away?

As the thermal trough shifts inland and reduces western WA temperatures somewhat, biogenic emissions reduce and so does SOA formation. So we expect fine particle pollution levels to be around the Good/ Moderate level from tomorrow onward if there are no new fires. Please see the forecast map above. Ozone formation will also relax a bit. [Side note: please do your part to prevent fires during this time of extreme fire risk. There are Red Flag Warnings about this].

What about eastern WA?

A 20,000 acre brushfire near the town of Lind is causing quite a bit of smoke locally. Winds are initially shifting the plumes westward, before driving it toward the Spokane area starting Wednesday. If the fire is still burning, that is. Moderate air is expected, with worse conditions closer to the fire.

Now's the perfect time to get prepared for potential smoke from wildfire in 2021. As we in the Northwest know, wildfire smoke lingering in the air makes it hard to breathe and can cause or worsen health problems. Agencies throughout Washington have partnered to promote Smoke Ready Week, June 14-18. You'll find helpful tips to lessen the impact of smoke at Washington Department of Ecology, Washington Department of Health, Washington Department of Natural Resources, Spokane Clean Air Agency, the Colville Tribe, EPA, and other state and federal partners using the hashtag #SmokeReady2021. Be sure to check out the smoke blogs of our neighbors in Idaho and Oregon too.

Here's our 10 Tips for planning ahead to protect you and your family from smoke, including Washington Dept. of Health's guidance on protecting yourself from wildfire smoke during the COVID-19 pandemic.

The map on this blog's webpage now includes a smoke forecast tool. It adds a layer to the Washington state map and gives the color-coded AQI forecast for every region in Washington. Currently it's a 2-day forecast, but watch for the expanded 5-day smoke forecast within the next week. Now you can plan ahead for that weekend trip to the lake!