A fire just south of Omak erupted yesterday and is still growing. There is extreme fire behavior. Large scale evacuations are underway and communities are threatened.  There are conflicting reports on fire size, with some saying 9,000 acres with other estimates much larger (over 65,000 acres), but active fire locations appear to show a very large area burned (map below).  The fire was initially being called the “Cold Springs Fire” and the “Road 28 Fire.” Douglas County officials say it’s officially been renamed the “Cold Springs Canyon Fire/Pearl Hill Fire.”  Today's GOES animated imagery shows a big plume traveling south this morning.  Winds should eventually bring smoke transport full circle today and tomorrow, affecting Central WA.  Smoke models don't have a good representation of this fire but degraded air quality is Moderate across many parts of Central Washington this morning, with Very Unhealthy air being monitored in Sunnyside.  Smoke may head west and affect elevated locations today (Twisp?), but winds should die down tomorrow, and smoke could pool in Central WA.  Expect updates tomorrow on this blog. In other news, the Evans Canyon fire exhibited little growth yesterday, with only a few thousand acres burned (76,000 acres burned over the event). That fire is at 60% containment with minimal fire behavior. 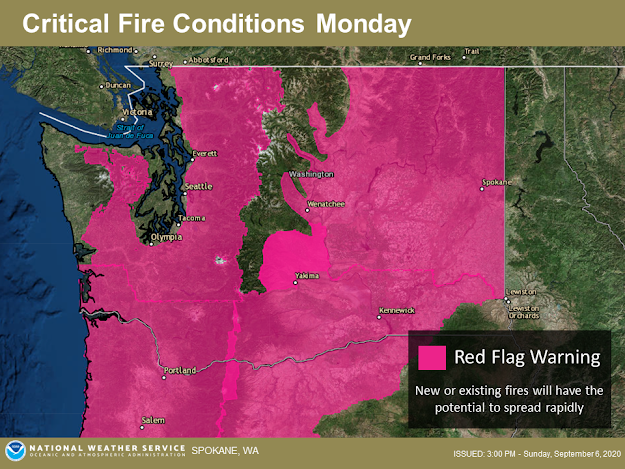