Statewide forecast — May 31: Wildfire smoke is back and so are we. Expect light smoke over eastern WA this weekend

It would have been great if we could have wished our readers a "not so bad" 2019 wildfire smoke season. But smoke from Alberta has forced us back to business by the end of May. Fortunately, the levels in eastern WA are not that severe and are expected to be no worse that Unhealthy for Sensitive Groups this weekend. Most areas will record Good or Moderate air.

This pair of satellite images from yesterday and this AM show smoke from northern Alberta fires flowing down the Okanogan and Columbia River valleys into eastern WA. 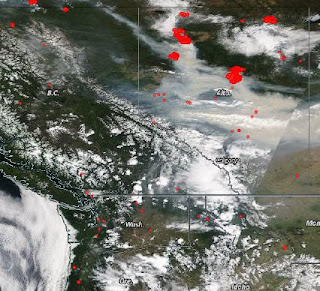 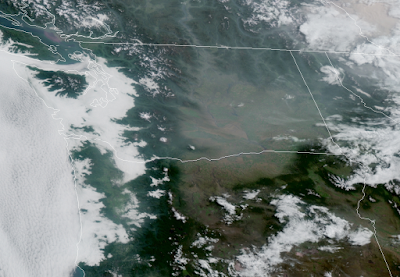 Smoke is mixing down to the surface, and the fine particle pollution monitors have recorded a slight increase since this AM. Here's a 3-day timeseries of a few monitors in eastern WA. 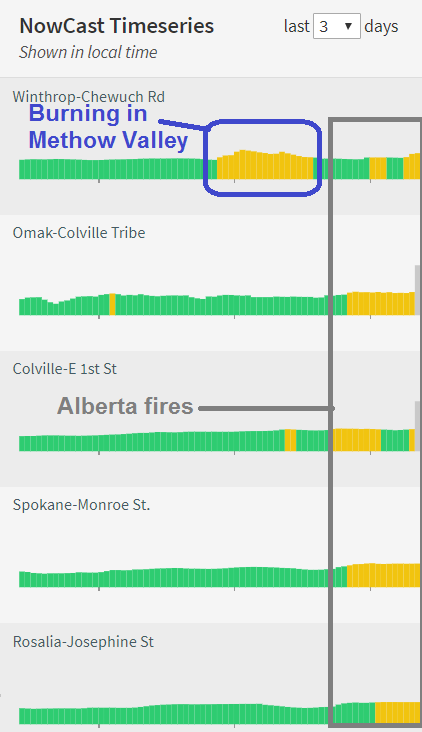 Models suggest some Alberta smoke will slosh around this weekend, initially receding from the Cascade foothills and Columbia Basin, being confined to the far eastern part of the state (including Spokane) before rebounding Sunday & Monday. Again, not expecting a lot of smoke. But the cat among the pigeons is the risk of lightning in the Cascades and NE Washington and the new fires this might spark off between now and Saturday evening. Spotty downpours are expected but their pollution- cleansing and fire- dousing potential may not be harnessed entirely if they're not in the right place at the right time.

Little or no wildfire smoke is expected to reach the surface in western WA, but some light smoke aloft could make sunsets prettier. Smoke from local fires cannot be ruled out. See the section titled "Prescribed Burns" in the "Fire Information" tab above.