Since this is the era of big data, lets compare our plight with those from far and wide

There are claims that we've been exposed to the worst air in the world. True? Fair comparison? Let's investigate that without belittling the terrible air quality conditions we've all had to endure for at least a week now.

Here's a map of global air quality right now. It uses all available measurements worldwide and uses machine learning methods for spatially interpolation. US west coast is in baaad shape. Worst ranked cities right now are all in our neck of the woods. 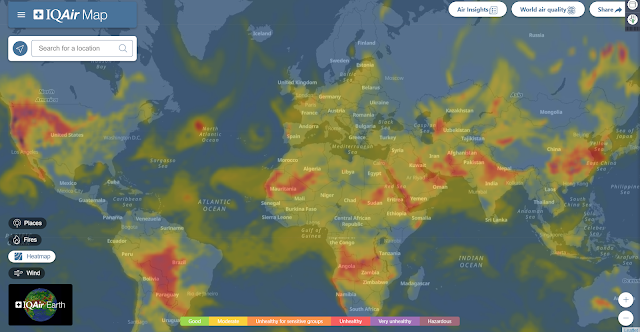 But to do a proper apples-to-apples comparison, we should compare our air during our "bad" season with the "bad" seasons in other places, not our bad against their better times. So lets leverage data from the US State Department's (DoS) air quality monitors around the world. These are easily obtained from one place and have a pretty good quality control regime.
I've pooled PM2.5 data from the ten highest embassies which recorded data for at least two years anywhere between 2012- 2019. These are: New Delhi & Kolkata (India), Dhaka (Bangladesh), Ulaanbaatar (Mongolia), Kampala (Uganda), Kathmandu (Nepal), Jakarta (Indonesia), Chengdu & Shenyang (China), and Manama (Bahrain). You can see more details about their air quality here. "Normal" conditions were defined as the range between monthly lower and upper quartiles, since the median passes right in the middle of it. This is also known as the interquartile range, or IQR. 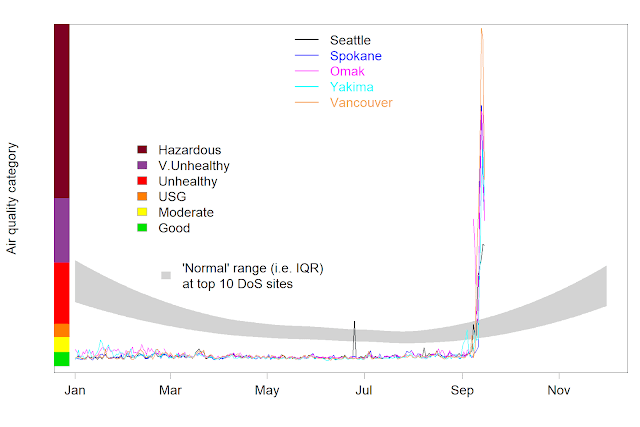 The above figure shows how air quality in Seattle, Spokane, Vancouver, Omak and Yakima have varied from 1 Jan- 15 Sept 2020, against the backdrop of IQRs at ten embassies. As can be seen, the overseas cities experience terribly compromised air quality primarily in the winter months. Right now is their "better" season. Even though we spiked right to the top of the AQI chart this week, bear in mind that:

Moral of the story: yes its bad here now. Many others have it worse for much longer. Folks who live in these environments and our diplomats serving there can offer us some coping tips.