Good air quality has been sustained across the state for several days now thanks to some precipitation, cooler temperatures, and increased relative humidity.  Significant precipitation is expected this weekend too, which will further reduce any remaining fire activity.  Clear skies are expected next week but the summer weather is done for this year.  We are even starting to see some agricultural and prescribed burns in places, which indicates that the summer wildfire season is on its way out the door.

Fire activity on the eastern slopes of the Cascades has been minimal. The light rain on Tuesday helped increase containment of fires like McLeod and Crescent Mountain. Some light smoke and fire activity will still be visible in parts of Okanogan County (e.g. Pasayten, Twisp) as stumps, downed logs, and other ground fuels continue to smolder.  Expect Good air quality for the next few days with some intermittent Moderate conditions immediately downwind of smoldering fires.

Southwesterly winds are expected in Northeastern Washington over the next couple days.  So we shouldn't see much of any smoke from the nearby fires in Canada and Idaho that are still lingering.  Expect Good air quality, though some small fires in the area have been pushing the Newport monitor into the Moderate category at times.

Air quality around Yakima is Good but the Miriam fire is still experiencing a little growth.  This means that residents in Yakima county that are immediately downwind of the fire may see some intermittent Moderate conditions. 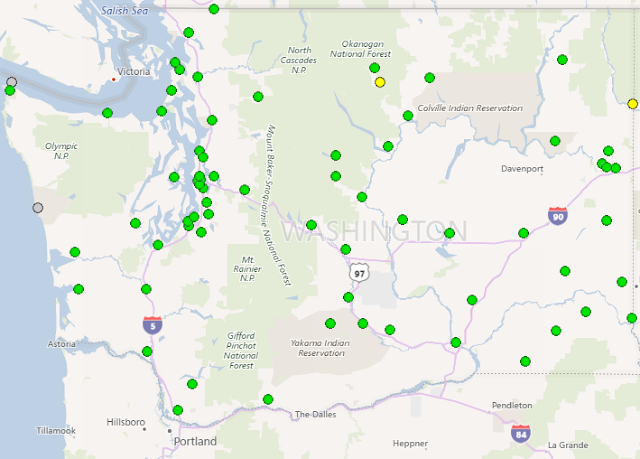 Western WA is largely free of smoke and will stay that way through early next week. Some light smoke from the Maple fire could potentially hit areas north of Seattle, but not expecting anything worse than spotty, short-lived Moderate conditions.

Weekend forecast for eastern WA
Southwest winds are picking up but haven't yet delivered much clean air yet. Present air quality runs the gamut from Good to Unhealthy. More greens will start appearing on the map as the day progresses, starting from the southwest. However some fire growth is expected as winds ramp up.

The southwest winds will die down on Saturday, allowing smoke from fires in the Washington Cascades to flow into nearby communities. Chelan and Okanogan Counties are likely to take a beating again (sorry!) and there is an Air Quality Alert through Sunday morning to address this. Air could be as bad as Very Unhealthy at times.

Eastern WA will also lie downwind of Oregon wildfires this weekend, although models are not advertising large smoke intrusions. Winds pick up again on Sunday with the possibility of some rain (YEAH!!!), alleviating air quality concerns somewhat. Here's what the UW weather models show for 24-hr total precipitation, ending at 5AM Monday. Over 1" in high terrain! Too optimistic?

All in all, areas to the south and east of a line from Goldendale to Spokane can expect mostly Good air this weekend. Yakima to Wenatchee could see periods of Moderate or even Unhealthy for Sensitive Groups. Other than Chelan and Okanogan, north central and north eastern counties could see air ranging from Moderate to Unhealthy. Air quality will be better further from the Cascades.
Posted by Ranil Dhammapala- WA Ecology at 9/07/2018 02:33:00 PM 1 comment:

Some minor tweaks to the forecast issued yesterday:
Here's the satellite picture from this morning (click for 1-2PM animation). 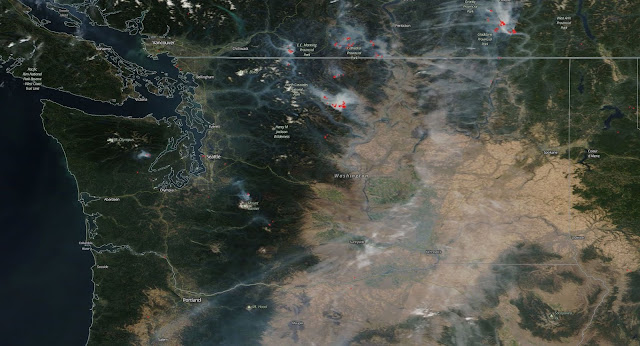 Notice how smoke has filled many of the Cascade valleys. The animation shows some smoke plumes have started blowing eastward this afternoon. Problem is, surface level winds are still easterly and will likely remain so until early Thursday. It will then take several hours to clean out western WA, so expect air to remain Moderate to Unhealthy for Sensitive Groups.

It will be Friday AM before eastern WA starts to scrub out, leaving many areas with Unhealthy or worse air. As the front drags through eastern WA:
A return to Good air is likely over the weekend, save for areas very close to large fires.
Posted by Ranil Dhammapala- WA Ecology at 9/05/2018 03:17:00 PM 6 comments:

Statewide forecast — Sept. 4: Smoke returns to eastern WA, western WA on track to get a whiff. Improvement on Thursday

Active weather over the last week helped most of the state breathe easy. But much of eastern WA took a turn for the worse last night with fine particle pollution levels ranging from Moderate to Unhealthy. Wildfires in Okanogan County and BC (just north of Stevens County) are the main culprits. 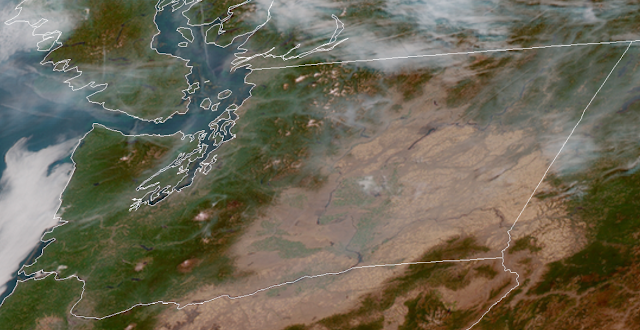 A thin layer of smoke covers much of eastern WA, with denser plumes closer to the above mentioned areas (partially obscured by upper level clouds).

Forecast for eastern WA
Winds will die down and allow smoke to start accumulating later today through Thursday morning. This could lead to areas of Very Unhealthy air in parts of Okanogan and Stevens Counties. Unhealthy conditions currently seen in Spokane are likely to improve slightly as winds turn northeasterly.

Here's what the Canadian FireWork model is predicting for 2PM Wednesday (left) and 5AM Thursday:

Not expecting much clearing until late Thursday, but by then we might have smoke from fires to our south brushing by south central and southeastern WA. So don't bank on the air getting much cleaner than Moderate, anywhere in eastern WA before Friday.

Western WA forecast
As can be seen from the model predictions above, some smoke from fires in the Cascades is likely to drift into western WA (more pronounced north of Seattle). This could start as early as this evening, so don't be surprised if today's sunset evokes bad memories. But take heart: it wont be as bad as what we endured recently! Expect improvement by Thursday morning.

Update on active fires in the Okanogan-Wenatchee NF.
The three largest fires in Washington are the McLeod, Crescent Mountain, and Cougar Creek fires. The Crescent Mountain fire remains the most active and smoky of the three and continues to impact air quality in the area at times with Twisp (and likely Carlton) as the hardest hit. Winds have been predominately from the NW moving smoke to the SE sparing Winthrop from Crescent Mountain smoke. Smoke production from the McLeod fire has lessened recently since it is showing much less activity and air quality in Winthrop has improved as a result. Smoke from the Cougar Creek fire has also reduced significantly as the fire is brought under control but smoke continues to affect Plain and Entiat at times depending on wind speed and direction.

Tonight winds will strengthen from the passage of a cold front and firelines will be tested. Winds will shift direction to be more northerly moving smoke to the south although brisk wind speeds should prevent smoke from accumulating.