The last week in July and the first week in August are, on average, the hottest weeks of the year for Washington, and Summer 2022 sure is living up to that billing! Excessive Heat Warnings and Heat Advisories cover nearly the entire state, and will remain in effect through Friday evening. Tuesday the 26th will be the hottest day for areas west of the Cascades, where temperatures will climb into the upper 90s across the Puget Lowlands, while areas east of the Cascades will continue warming through Thursday, with many areas reaching 105-110F through the end of the week. Temperatures will struggle to cool down each night this week, exacerbating heat illness among vulnerable populations. Seattle has opened up numerous cooling centers, with cities across the state following suit. 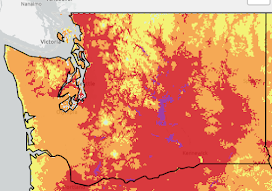 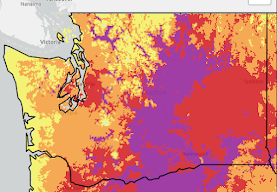 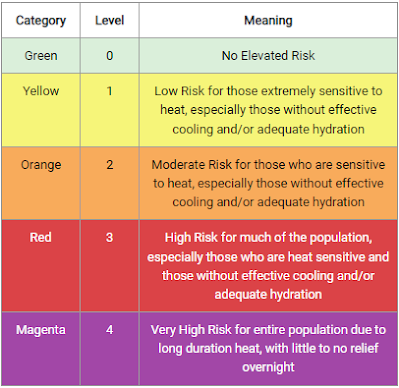 While Washington has managed to make it through July with below average fire activity, wildfire season is in full swing across much of the western United States. Several large fires in and around Yosemite in east-central California are emitting smoke that may cause some haze in southwest Washington in the coming days. Additionally, the Nohomin Creek fire near Lytton, BC has surpassed 5,000 acres, and smoke was able to ride the Fraser Valley outflow into northwest Washington last night. I anticipate that very little smoke from either region will make it to the surface in Washington, but haze formation in the mid-levels is likely through the end of the week, concentrated in far southwest Washington, and the North Cascades/Okanagan National Forest. Below is a satellite image of the smoke in northwest Washington and a hi-res model forecast depicting total wildfire smoke, nearly all of which is located above 5000ft in altitude. 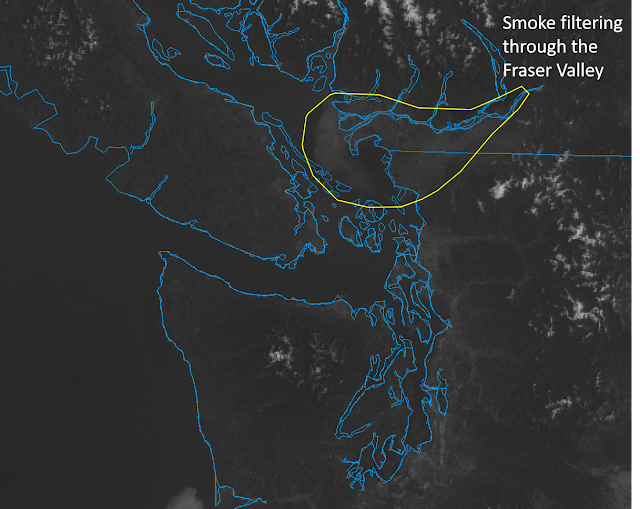 AQI across the state is generally good, with some Moderate values showing up along the I-5 corridor between Tacoma and Seattle. Strong nighttime temperature inversions under the very hot mid-level ridge are notorious for causing air quality issues, but thankfully western Washington is seeing good ventilation in the afternoons. Of note, no areas under the smoke haze from British Columbia are reporting elevated AQI values, a good sign that the smoke is remaining elevated for the time being. 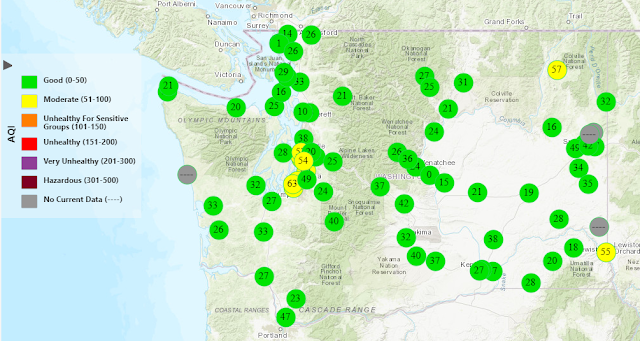 Thank you for reading the Washington Smoke Blog! Please leave a comment if you have any questions, concerns, or feedback for the team!
Matthew Dehr
Wildland Fire Meteorologist

The Stayman Flats fire southwest of Chelan is Washington’s first large fire of the year. The fire,  reported on Monday, July 18, quickly grew in size over the next several days. The fast moving fire resulted in Level 3 evacuation notices for some residents. As of Thursday, July 21, the fire consumed 1,200 acres of sagebrush and grassland. Thankfully, the fire is now at 80% containment and the Department of Natural Resources (DNR) continues to have crews on the fire.

Washington’s first big fire of the year comes as we approach the hottest week of summer so far. Weather forecasts predict temperatures could soar into triple digits east of the Cascades next week. This extreme heat will continue to dry out the fine fuels (grasses and brush) that feed fast burning fires, like the Stayman Flats fire. Longer burning fuels (think timbered lands) in the mountains will also lose moisture as the summer continues, increasing the chance of larger, prolonged fires.

Although the Stayman Flats fire is the first large fire this summer, we did not see major smoke impacts. Air quality monitors remained in the green in most areas. Overall, smoke remained confined to the immediate area around the southern tip of Lake Chelan. However, the Stayman Flats fire is a good reminder for everyone to be vigilant as the weather warms and summer thunderstorms loom.

Here are some key things to remember:

Let’s all be safe and prepared as we move into this wildfire season!
#SmokeReadyTogether    #SmokeReady