Atmosphere is not delivering what we ordered

Sad to say, the clearing that should have been here by now is not only tardy but is poofing out as a lackluster weather feature that won't do much for us. The "cleanest" air in the state right now is Unhealthy air, whereas the model's advertised menu said we should have been seeing substantial improvements along the coast this morning.

Not much in terms of weather to change the status quo a whole lot. See the forecast map for expected conditions in your area. To add to our woes, light southerly winds will continue for another day at least, dragging more smoke directly from Oregon fires northward along the I-5 corridor. So even if the ubiquitous smoke pool from offshore starts to erode a bit, a replacement is en route.

Wanna get geeky and figure out what went wrong?

Many of us had relied on the HRRR- smoke model for several reasons. The University of Washington runs a suite of weather models which all have different physics options, so as to get a handle on uncertainty. One of the ensemble members is run with the same physics options as the HRRR. The plot below shows what yesterday's UW model runs thought ventilation indices along the WA coast would be like. The HRRR (light green trace) was in fact one of the most optimistic, showing about twice as much clearing as the mean of all other models. So today's forecast leans closer to the UW WRF model, which is closer to the ensemble mean. 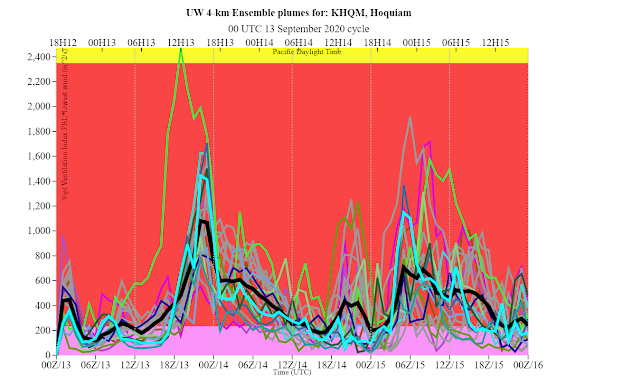