A high pressure system will remain over the State today producing a subsidence inversion which will hold smoke in the lower parts of the atmosphere today (<10,000 feet).   Above the inversion, westerly winds will transport high levels of smoke and haze across central and eastern Washington.  Below the inversion, easterly winds will transport smoke from the fires in British Columbia, Montana, and Idaho in eastern and central Washington, while smoke from the fires in the Cascades will be transported into the western portions of the state.

Figure 1 illustrates the overall fire locations (indicated by flames) and smoke pattern at ground level for the state today.   The map is best interpreted in a relative, rather than absolute sense.  The dark red  indicates areas of heavier smoke and the higher shades of red (i.e., pink) indicate areas of lighter smoke.  Because these are 24-hour averages, there will be differences at any given hour.  Some locations may experience heavier concentrations of smoke for shorter durations such as in low-lying area where smoke from the fires drains down valleys.

Smoke will likely start moving into the Seattle and surrounding metropolitan areas, and eastern portions of the State by early afternoon and will get more concentrated overnight with the onset of the evening temperature inversion, which will hold smoke closer to the ground. 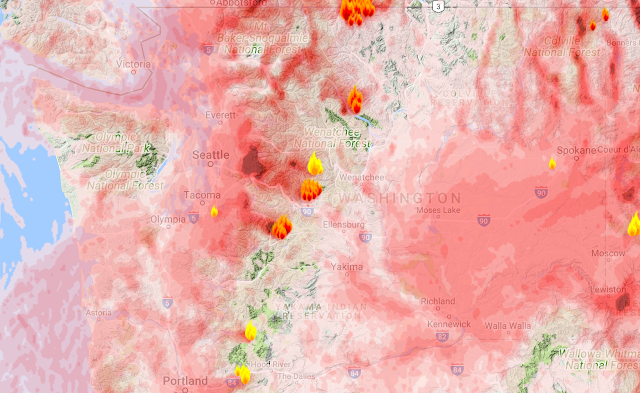 Conditions remain much the same as Monday, except the thermal trough will strengthen throughout the day.  Fire activity will likely increase due to the thermal through, but also be tempered by the smoke. East winds underneath the subsidence inversion will persist through the day on Tuesday.  Much of the state will continue experience smoke and haze, very similar to Monday’s forecasted pattern.

Disclaimer:  Weather and fire activity can change quickly.  Please check back for updates to these forecasts as conditions change.  If you’re traveling out of Washington, many other states also have smoke blogs, including Oregon, Idaho, and California.  So please consider those resources to help you plan your travels.
Posted by Rick Graw at 9/04/2017 11:50:00 AM