Note: Many Red flag warnings in effect. PLEASE do your part to prevent fires 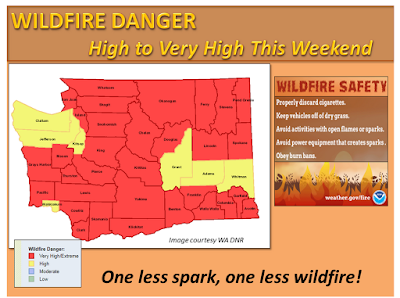 Western WA smoke forecast
Some smoke from Oregon showed up from the southwest overnight but for the most part, has remained around 10K ft aloft. Here's a timelapse from Skunk Bay this morning:


Air quality has been mostly Good for the last 24 hours and will likely remain that way for much of Sunday.

There is consensus among models that east winds will start up early Monday morning and persist through Tuesday evening at least. Here are how all the weather models depict relative humidity at SeaTac airport.

The thick black line is the average of them all ("ensemble mean" in geek-speak). Times are in GMT, so subtract 7 hours for local time. When dry air from eastern WA invades, the humidity stays low.

These east winds will transport smoke from the Jolly Mountain fire into the Seattle area, and the Norse Peak fire to southwest WA. There is a chance that smoke from the Diamond Creek and Uno Peak fires could foul up northwest WA. By Tuesday some of this smoke could find its way to the Washington coast. Air quality is likely to vary from Moderate to Unhealthy at different times and places. In general, partial clearing during the day and poor air at night.

Wednesday could bring some short-lived relief as winds shift to south-southwest. Oregon smoke is lurking to our south and could surge into western WA. Hard to win when there is only one "clean" wind direction to work with, i.e. northwest. Please stay tuned.

Eastern WA smoke forecast
Wish I had better news for these folks who have been assailed by wave after wave of smoke. Next several days will to be no different. While east winds starting early Monday reduce smoke transport from Cascades → Columbia Basin, smoke from fires in Idaho and Montana are likely to fill the void and blast far eastern WA.

We are looking into ways to provide communities with localized and timely information. Please stay tuned as resources are stretched very thin.