Currently, there are 11 large fires burning in Washington, as shown in Figure 1, and listed in Table 1. Three of these fires are over 10,000 acres, with the Diamond Creek being the largest, and Norse Peak and Jolly Mountain being the second and third largest, respectively.  Norse Peak fire (not labeled on the map) is next to the much smaller American Fire.  The Jolly Mountain Fire (also not labeled) is located over the "W" in the word "Washington" on the map below.  The most active fires yesterday were Norse Peak and Jolly Mountain.  The Bridge Creek fire is now 98% contained.  The Uno Peak and Ferry Point fires, which lie on the north side of Lake Chelan, have merged into a single fire. 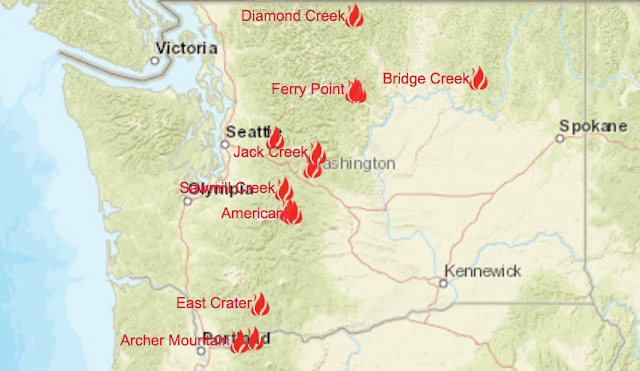 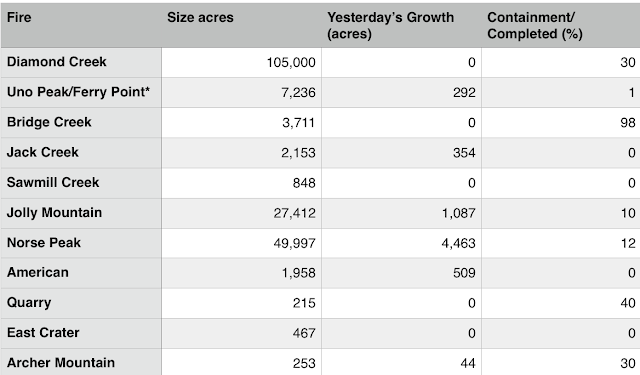 Air quality was also greatly improved state-wide today as illustrated in Figure 3.  As of 2 pm on Sunday afternoon, most of the state was experiencing good air quality.  Moderate levels of smoke were present over south central and a pocket of eastern Washington and in Seattle.  Unhealthy levels of air quality occurred only in White Salmon, due to the fires in the Columbia River Gorge. 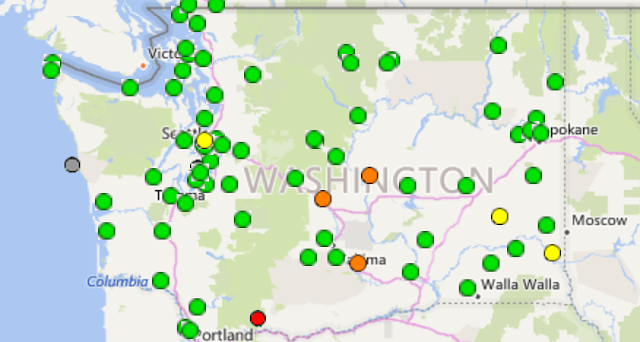 On Monday, a weak ridge of high pressure will try to build into the state.  Fortunately, this ridge of pressure will not be nearly as strong as the one we experienced over the Labor Day weekend.
Figure 3 illustrates the 24-hour average conditions for the period ending at 5 pm on Monday. Smoke is expected to impact central and eastern Washington which lie to the east of the Norse Peak and Jolly Mountain Fires, and in Methow Valley and Tonasket areas.  Yakima, Cle-Elum,  and Wenatchee are likley to experience smokey conditions.   At times, smoke will extend as far as Richland and Kennwick and parts of the Columbia Basin.  Additionally some smoke is expected in the very northeast corner of the state.  The model did not, however, detect the fire in the Columbia River Gorge which caused unhealthy levels of smoke in White Salmon today.  Easterly winds are expected in the Columbia River Gorge tomorrow which will transport smoke into Vancouver/Portland Metropolitan Area. Other than that, most of western Washington can expect good air quality on Monday. 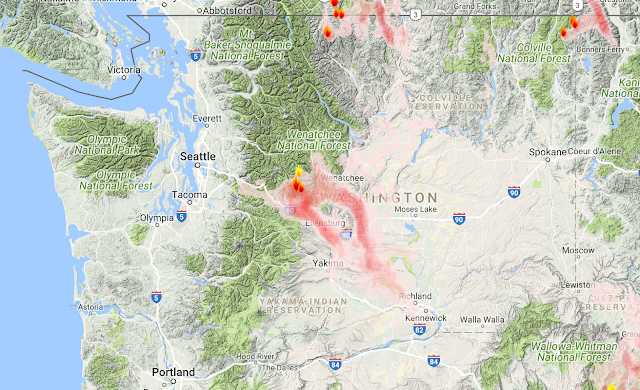 On Tuesday, the weak ridge will move out of the state as another low pressure system approaches. The overall smoke pattern on Tuesday will be very similar to Monday, except for the Columbia River Gorge, where west wind is expected, bringing smoke back to White Salmon and the eastern portion of the Gorge.  The maximum hourly concentrations of smoke are illustrated in Figure 4, in a relative sense.  Thus, areas of dark red will experience the heaviest smoke and areas in pink will experience light smoke.  Please note that again the fire in the Columbia River Gorge and consequently smoke from this fire are not illustrated on this figure. 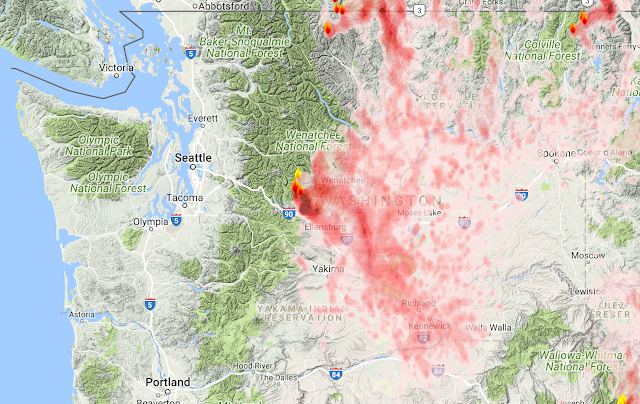