This smoke is trying to show us who's boss. Even when its days are numbered

When the Canadian smoke model forecast some smoke in Seattle this morning, we thought it was over-doing the east winds. Turns out it wasn't. Smoke from the Jolly Mountain and Norse Peak fire are now being transported to western WA. Today's satellite picture has too many clouds to see the smoke clearly, but a look at last afternoon's satellite image tells the story. 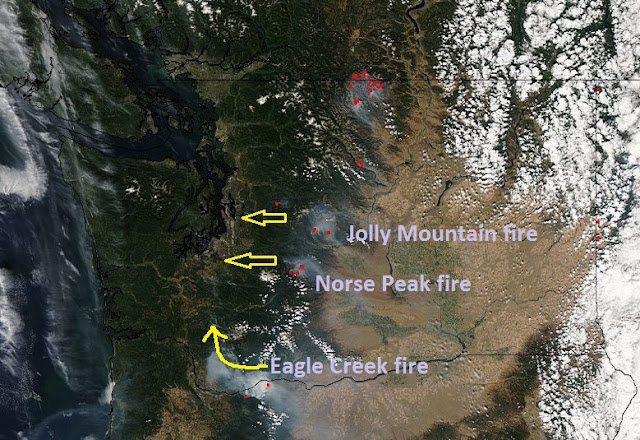 Seattle-ites are now being exposed to conditions similar to what the eastern foothills of the Cascades has been seeing for the last few days. Here's a plot of fine particle pollution levels at a few comparative sites.

Notice the spike in western WA this morning: this happens when smoke aloft mixes down when the overnight temperature inversion breaks in the morning.

It is expected that these conditions will be with us until mid morning on Sunday. The I-5 corridor from Mount Vernon down to Vancouver, WA will see air varying between Good and Unhealthy, with poor air at night and slight improvements in the afternoon. Smoke may may push a little further west, possibly leading to Moderate conditions in communities on the eastern foothills of the Olympics. The Eagle Creek fire will continue to impact southwestern WA communities causing Unhealthy air in several places.

Winds shift on Sunday morning and slowly but surely beat the smoke into submission by evening, showing who the REAL boss is. Wetting rains are expected in the Cascades so smoke production is likely to be diminished afterward.