Forecast: smoky with a chance of ashfalls

There was hardly a corner of the state that wasn't battered and bruised by smoke and ash yesterday. The smoke layer reduced maximum solar radiation intensity by almost 50% in Seattle, as seen in the following plot. Compare 1 and 2 Sept (sunny days in western WA) with 5 Sept.

Further, Ecology's air quality monitoring data website and the map of monitors above were feeling the strain of increased web traffic. Staff have been working overtime to restore and maintain services. If all else fails, EPA's AirNow site can serve as a backup.

When will it all go away?
Tomorrow for western WA. Not fast enough or complete enough for eastern WA.

How long will it STAY clean?
Not long enough, it seems.

Airflow turns westerly after the flushing tomorrow. Few of the smoke models seem to be capturing the large pall of smoke hovering over the Pacific ocean. 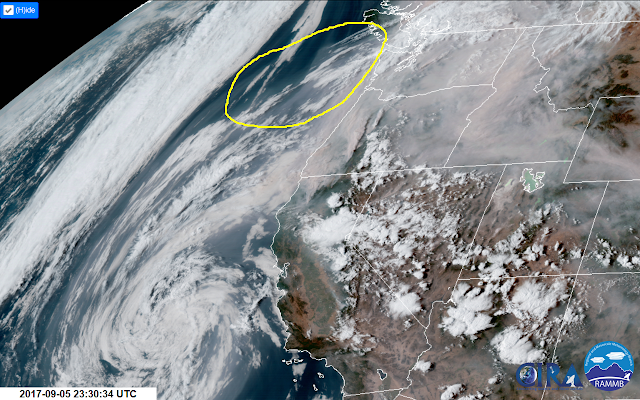 Some of that smoke is likely to mix down into western WA on occasion but don't expect air to be much worse than Moderate in a few spots. Problem is that models are building another ridge of high pressure (= light winds and poor smoke dispersion) from Sunday- Tuesday. Don't yet know if east winds which brought smoke from the Cascades to western WA will be part of the calculus or not. Please stay tuned.

Finally, about the  ash
Many questions were raised about the toxicity of ash. Our toxicologist Dr Matt Kadlec confirmed that ash from forest matter is basic (pH ~ 9) and does contain heavy metals and PAHs. It can cause skin/ eye irritation. However these particles are far too large to be inhaled and fine particle pollution measured by air quality monitors are a far more serious health concern. Besides, ash has not and will not accumulate in sufficient depths in our cities to put people at risk when cleaning it up.