Wenatchee enjoyed relatively clean air for about half a day before smoke impacts returned last evening. Cashmere enjoyed clean air for a little longer than that, but spread over two installments. Presently Cashmere is recording Hazardous air, while air in Wenatchee is Unhealthy. Entiat, Pateros and Trout Lake are recording Unhealthy for Sensitive Groups, Chelan and Ellensburg are recording Moderate air, while other monitors along the east slopes of the Cascades are recording Good air. The Columbia Basin has a mixture of Unhealthy for Sensitive Groups, Moderate and Good areas, with many sites showing little fluctuation since yesterday.
Yesterday's forecast is still pretty much on track, with strong nighttime inversions, above normal daytime temperatures and light winds (mostly terrain-driven). Largest smoke impacts are expected near the fires while most other areas in eastern WA get impacted by smoke sloshing around. Light east winds return on Thursday and it is possible that these may bring some smoke from Idaho wildfires to the Palouse, Clarkston and Spokane. In general, expect some smoke impacts in the morning and nighttime, with some afternoon clearing in most places.
A weakening front is expected to do no more than increase clouds and winds on Friday night, but at least this will help with smoke dispersion. Strong ridging is expected over the weekend, implying a return to stagnant conditions and even the possibility of east winds bringing ID wildfire smoke to the far eastern parts of the state and a little WA wildfire smoke to western WA. This bears watching.
The National Weather Service issued an Air Quality Alert for all of eastern Washington:

http://forecast.weather.gov/wwamap/wwatxtget.php?cwa=otx&wwa=air%20quality%20alert
The Governor has extended a burn ban on all outdoor burning in eastern Washington through midnight Sunday. 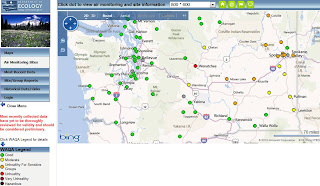