For the first time in nearly two weeks, none of the monitors in the state are recording Hazardous conditions. Pateros comes precariously close though- air quality there degraded somewhat yesterday and today while other nearby sites show an improvement in response to the passing front. Meteorological data in the area show winds picking up, but the sheltered location of Pateros probably resulted in smoke pooling in the area. Trout Lake, Winthrop, Omak, Chelan and Entiat remain Unhealthy, while Wenatchee, Cashmere, Twisp, White Swan and Toppenish (Unhealthy for Sensitive Groups) are clearing out quite well. Ellensburg, Cle Elum, Quincy, Leavenworth and Yakima all have Good air. Sites around the Columbia Basin vary from Good to Unhealthy for Sensitive Groups.

A front passing through eastern WA right now should help keep smoke levels in check through this evening. But sadly this improvement is short lived: a building ridge will cause a return to stagnant conditions through Friday. Strong nighttime inversions and light winds will ensure smoke sloshes around and causes the kind of impacts we have been living with over the last 2 weeks. Mild east winds return on Thursday and it is possible that these may bring some smoke from Idaho wildfires to the Palouse/ Clarkston areas. In general, expect some smoke impacts in the morning and nighttime, with some afternoon clearing in most places.

No significant precipitation in the 5-day forecast. Slight increases in wind speeds on Friday should help with dispersion in eastern WA.

A few areas in the south Puget Sound, SW Washington and the Olympic Peninsula might have smelled a whiff of smoke last morning as the inversion broke, but not enough to degrade air quality much. Wildfire smoke is not expected to push west of the Cascades, but with light winds over the next few days, expect a slight buildup of locally and regionally generated pollutants.

The National Weather Service issued an Air Quality Alert for all of eastern Washington:
http://forecast.weather.gov/wwamap/wwatxtget.php?cwa=otx&wwa=air%20quality%20alert

The Governor has extended a burn ban on all outdoor burning in eastern Washington through midnight Sunday. 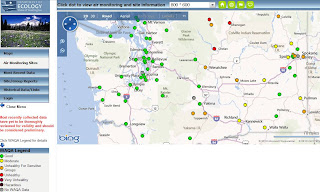