Air Quality forecast, 8AM Monday 24 September 2012
Issued by Ranil Dhammapala, Washington State Dept. of Ecology
Air quality in Cashmere and Wenatchee remain Hazardous, while Pateros, Entiat and Ellensburg are reporting Very Unhealthy air. Trout Lake, Quincy, Leavenworth, Omak, Chelan, the Methow, Yakima and Toppenish have Unhealthy air. White Swan, Goldendale and Cle Elum are recording Unhealthy for Sensitive Groups. Air in the southern part of the Columbia Basin appears good at present, while most other monitors in the Basin, with a few exceptions are in the Unhealthy for Sensitive Groups category.
The weather systems over the weekend that were supposed to alleviate some smoke in eastern WA also got up to a little mischief in the process. While they did cause some dispersion and desisted from sparking off new wildfires, they also transported some smoke from central Idaho wildfires further west which then mixed to the surface in eastern WA after the inversion broke. These impacts appear to have persisted throughout the day in a lot of eastern WA. Some smoke from WA wildfires was pushed up against the Cascades and impacted the communities at the eastern foothills once the drainage flows started and easterly winds let up.
Light winds over the Cascades today are not expected to do a whole lot to help with smoke in the hard-hit communities. That said the models are advertizing some moderate winds near the gaps along I90 and Hwy2 starting later today. If it pans out, this could lead to good dispersion in Ellensburg, Leavenworth and the Methow, but also risks limiting plume rise. Flow is most W-NW which pushes smoke into the Columbia Basin. But how far southeast into the Basin it will travel before turning NE (under a SW flow regime), is uncertain. This could lead to smoke impacts in the Spokane area too. The Yakima valley might get off lightly today, but parts of Klickitat County could see a little bit of smoke from the Mt. Adams fire.
Models are backing off on the strength of the low pressure systems that were expected to bring some cooling and spotty rainfall to the northern counties. No strong winds in the forecast through this week, though some clearing is expected east of the Cascades Tuesday afternoon.
Western WA did not see enough vertical mixing to transport this smoke to the surface. No air quality issues are expected in Western WA over the coming days.
The National Weather Service issued an Air Quality Alert for much of eastern Washington:
http://forecast.weather.gov/wwamap/wwatxtget.php?cwa=otx&wwa=air%20quality%20alert
The Governor has issued an emergency proclamation for all of eastern Washington:
http://www.governor.wa.gov/news/news-view.asp?pressRelease=1967&newsType=1 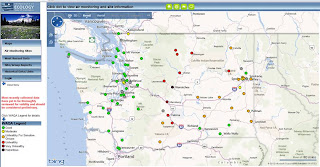