Wenatchee, Pateros and Cashmere saw a bit of clearing but air quality still remains Hazardous. Entiat, Quincy, Leavenworth, Chelan, Yakima, White Swan and Toppenish all experienced some clearing but still not enough to return to healthy air. Pullman and Clarkston also saw some much needed clearing in the evening, after an initial rise in pollution levels earlier in the day as the inversion broke and mixed some overhanging Idaho wildfire smoke to the surface. The threat of Idaho wildfire smoke has passed thanks to a wind shift. Ellensburg and Cle Elum saw Good air yesterday, and should stay that way today.
Omak and Twisp saw some increase in pollution levels as a weather system pushed a little smoke up those valleys, but should see a little improvement today.
There are no reports of new fire starts from lightning strikes as yet, but a small threat of lightning remains until tonight. Isolated light rainfall is forecast for several parts of the eastern Columbia Basin today as a low pressure system passes through the far eastern parts of the state, but not near the wildfires. While areas nearest to the wildfires will continue to see poor air, West/ Southwest winds will help with smoke dispersion. Eastern WA will continue to see some gradual improvement in air quality, though periodic impacts from drifting smoke are expected.
Some cooler temperatures and a little bit of rain (the latter mostly in the Northern counties of eastern WA) are forecast during the work week. This will further improve air quality.
No air quality issues are expected in Western WA over the coming days.
The National Weather Service issued an Air Quality Alert for much of eastern Washington through Monday evening:
http://forecast.weather.gov/wwamap/wwatxtget.php?cwa=otx&wwa=air%20quality%20alert
The Governor has issued an emergency proclamation for all of eastern Washington:
http://www.governor.wa.gov/news/news-view.asp?pressRelease=1967&newsType=1 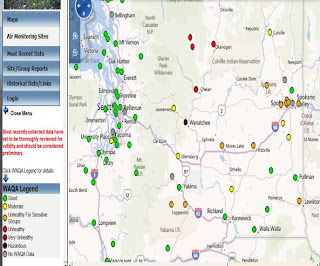