Western WA outlook: Some smoke upstairs, but good on the ground floor…

Western Washington has mostly lucked out so far this year when it comes to wildfire smoke. We can thank a steady flow of clean air from the Pacific Ocean, except for a short visit from that in-law we’re all trying to forget, a certain heat-dome that probably deserves its own name. But I’ll save that for another time.

Anyway, that steady flow of clean air can’t hold up all summer, and indeed it seems to be changing on Friday, Saturday, and into Sunday. The HRRR model shows a decent plume arriving in western Washington late Friday afternoon, with another wave heading in overnight and into Saturday. Here’s some more details: 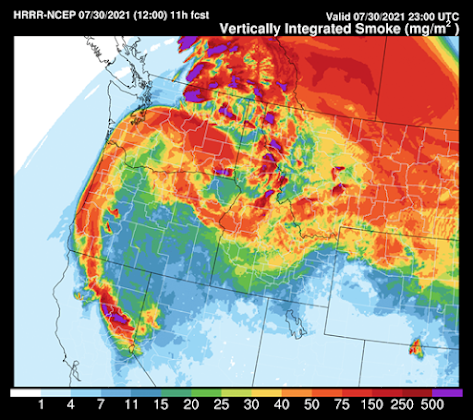 So far, the Pacific Northwest has mostly been getting clean marine air flowing west to east . But a ripple in the pressure patterns has sent smoke from Northern California and Oregon to the northwest, and right for us. This is forecast to arrive late Friday afternoon. (See the first figure, which shows the sum of smoke at all levels, like looking down from a satellite) The pressure gradient in central and eastern Washington, and further east, will also shift on Friday and Saturday and start sending smoke to us, too. Saturday late afternoon, we’ll get another wave of smoke from central and eastern Washington and British Columbia.

But what does this mean for Western Washington air quality? … it looks to be a classic upstairs-downstairs situation, in which most of us in the lowlands of Puget Sound and Western Washington will likely be spared, while smoke passes overhead.

While two waves of smoke are expected to reach our skies, they’ll be at 2 km or higher (see the second figure), and the situation at surface should be very different. Over the weekend, there will still be a pressure gradient at the surface from the coast to the western side of the Cascades. So, clean marine should continue to push in, to at least the foothills. Although the upstairs smoke and the downstairs marine air generally keep to themselves, there’s a chance that a few of the upstairs visitors might trickle downstairs and push us to MODERATE air quality. 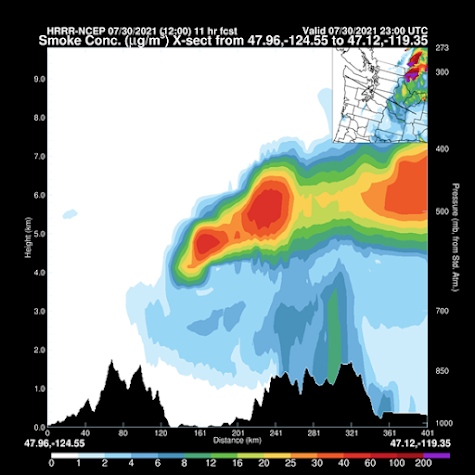 To add to this mix, the warmer temperatures are bringing us elevated ozone (smog) conditions. The atmosphere cooks up ozone from the emissions of cars, trucks, industry, and even plants. In the summer, when the temperatures get turned up to the 80s and 90s, the ozone can build up to levels that are considered Unhealthy for Sensitive Groups. Because the “cooking” of the urban emissions takes time and the winds during these hot episodes are to the east, the high ozone levels mostly occur in the foothills of the Cascades and not in the urban core. Today (Friday) we’re likely to see highs around 90, which means ozone might reach Unhealthy for Sensitive Groups. Saturday will still be hot, but will have some clouds, so the “cooking” won’t be as fast, so we should stay in the Moderate air quality category, for ozone, and therefore overall… assuming no smoke sneaks down from upstairs.
If the forecast holds, the Puget Sound should continue to have GOOD to MODERATE air quality downstairs, even though the upstairs will look hazy. And, hopefully, we won’t get much lightning in the Cascades.