Many residents of Central and Eastern Washington have been getting impacted by new and existing fires in the region, with the worst smoke impacts occurring in the cooler hours.  The air has been getting a little better today as the smoke stays mostly aloft, but it will stick around with more smoke to be generated this week.

Nespelem (Colville Reservation):  The Chuweah Creek fire and other lightning ignitions in the area started yesterday in timber, grass, and brush.  Information is limited but some estimates show over 12,000 acres have burned in the area, with 3 homes lost.  Evacuations are in effect and structures are still threatened.  Thick plumes can be seen traveling south today in the GOES imagery, with sensors reporting USG to Unhealthy air in the Grand Coulee area.  Winds will likely push smoke east over the next few days, and fire growth is expected.

Asotin:  The Lick Creek fire grew nearly 9,000 acres yesterday and has burned over 55,000 acres in grass and brush since it started on July 7.  Crews are working hard to manage the fire.  A lot of the smoke will continue to move south, but residents in Clarkston and Asotin will continue to experience USG air intermittently throughout the week.

Mazama (NW of Methow): The Varden and Cedar Creek fires grew 400 acres yesterday and have burned almost 1,000 acres in timber.  The Methow Valley has had Moderate to USG air and this will likely continue throughout the week, depending on fire activity.

N. of Yakima: The Burbank fire grew 6,000 acres yesterday in grass and brush and has burned 13,000 acres since July 10.  Smoke has caused intermittent Moderate air in the area.  Good news though, evacuations have been cancelled as the fire crews have made good progress and secured containment lines along I-82.


Canadian smoke has also been impacting residents around Oroville, as over 300 fires burn in B.C. Expected winds this week should clear out the current Unhealthy air, but nighttime stability will allow intermittent smoke impacts in the area throughout the week.

Seattle and the rest of Western Washington should be clear of smoke for the week, with perhaps some intermittent Moderate air.

A fire weather watch is in effect for Central and Eastern Washington from Wednesday afternoon through Thursday evening. Gusty winds and low relative humidity will cause fires to spread more easily.  A cold front should move through Thursday and increase relative humidity, but winds will still be a concern for fire growth.  Looks like it's going to be more ups and downs with the weather!  Please use caution when recreating or working near dry vegetation, as fire can ignite and spread easily in these conditions. 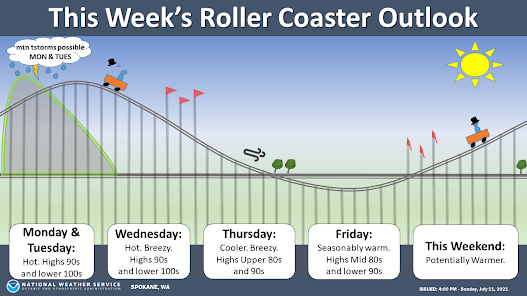