Spare a thought for our neighbors in Okanogan County who are facing what appears to be the earliest start to smoke season. The plot below shows how fine particle pollution levels have evolved between June and September each year since permanent monitors were established in the county. This year (thick red line) spiked earlier than other years, but thankfully not as high as some previous years which we all prefer to forget. 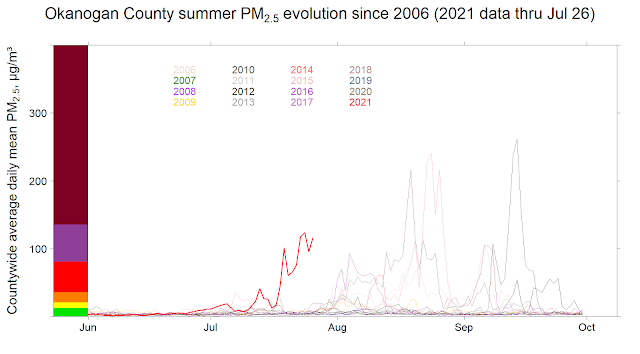 This morning's satellite picture shows how south winds from yesterday have continued to push the smoke northward. However this upper level wind pattern can only do so much with high pressure building in to the area. 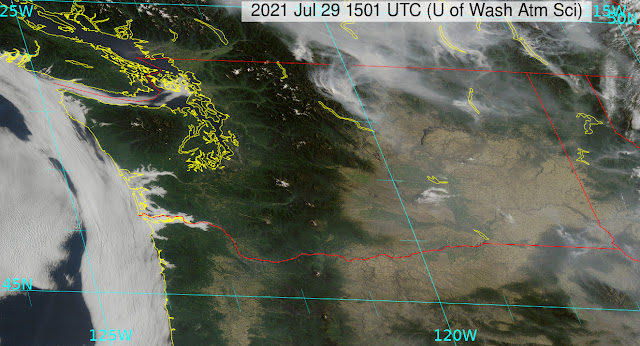 No doubt the British Columbians love us dearly for all that.

Good news is that a decent amount of rain is expected in the North Cascades Sunday into Monday, aiding firefighting efforts. But first we've got to get through a scorching weekend with little wind. An Air Quality Alert is in effect for the northern counties.

We expect some smoke from Oregon fires to start moving over the Columbia Basin from Friday, causing Moderate air which could later degrade to Unhealthy for Sensitive Groups. Here's a snapshot of all the different forecasts (aka "ensemble models") we have for Spokane and Colville, for the next 5 days. Although there's a wide spread among predictions, Unhealthy air cannot be ruled out.

Please use the resources on this blog to safeguard your health during smoke events.

Check out the technicalese explanation of our ensemble smoke forecast system here.