Washington is in the import-export business

Of smoke, that is.

Here is yesterday's daily average estimated fine particle pollution map. "Estimated" because it is a satellite- derived product. Satellites can't decipher the height at which smoke is present; they only see all the vertically integrated smoke in the atmosphere. Various algorithms are used to estimate how much of this is present at ground level. Without reading too much into the absolute numbers, we can see where the smoke is coming from and going to. 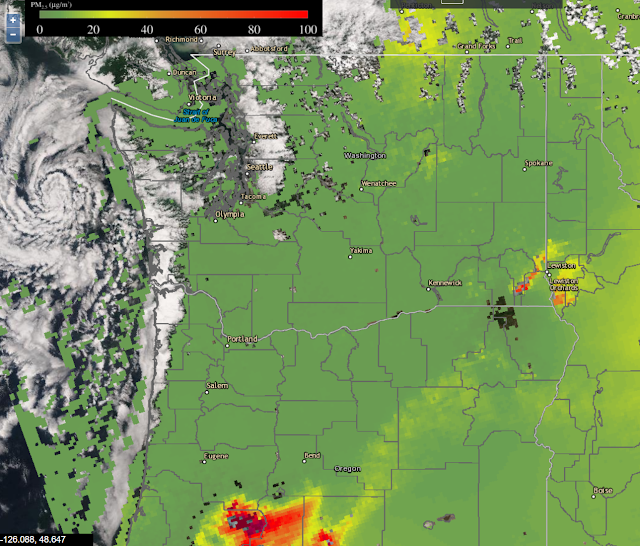 The fires near Asotin (Silcott, Dry Gulch and Lick Creek) are problematic for nearby WA and ID communities (read: export). We expect Moderate to Unhealthy for Sensitive Groups air in the area for the next few days.

Some smoke from wildfires in southern British Columbia is drifting over the north central part of the state (read: import). While most of it will remain aloft for now, some splotches of Moderate air can't be ruled out this afternoon. Smoke from southern Oregon fires will also fly over the south central and southeastern part of the state tomorrow. Enjoy the pretty sunsets.

No other major smoke concerns for now thanks to favorable winds, but those happy-go-lucky days are numbered because new fires are an ongoing concern (see the Red Flag warning). Please do your part to prevent fires.