We love summer and all, but how about some fresh air?

Monday Morning has started off with much of the Central Puget Sound getting wildfire smoke and having air that is UNHEALTHY FOR SENSITIVE GROUPS with some areas in the foothills well into the UNHEALTHY and some spikes of  VERY UNHEALTHY. See our Sensor Map image below. 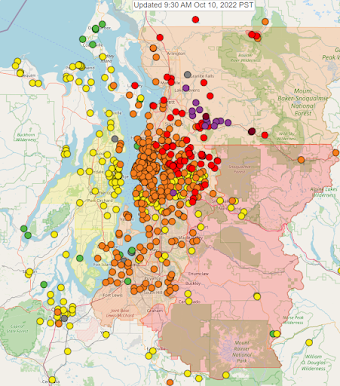 The weather pattern that gives us our awesome summer days has decided to stick around... far ... too ... long (for when we have wildfires nearby). Now, don't get me wrong, I love summer and all, but this pattern usually breaks down in September and we start getting occasional rain, or the switch flips to perm-a-rain. But this year we may be headed for a record, as others have discussed. But, we should be getting a bit of a break for the next day or two as a solid wind should start this afternoon into the evening, and push everything back to the east. The Puget Sound and western WA should have a significant improvement later today. But the switch still hasn't flipped, and we may not get that for another week...

What does this extended summer mean for our air quality and how does this compare to other years, especially the big event of 2020? One way to get a sense for this is the annual accumulation of exposure. The EPA's designated National Ambient Air Quality Standard (NAAQS) uses the annual average as a key measure of health risk from fine particles (PM2.5). So, we can look at how our exposure adds up for a whole year and approaches the NAAQS. See the figure below. Here, we see how over the course of a year, each day adds to our cumulative exposure (or average). Each day is colored by the AQI category that we would use on a forecast for that day. [Green is GOOD, Yellow is MODERATE, orange in UNHEALTHY FOR SENSITIVE GROUPS, red is UNHEALTHY, purple is VERY UNHEALTHY] We need to keep that annual number under 12, and ideally it would be even lower. To give a general sense, I'm showing data from Marysville and North Bend. The Marysville 2020 data shows the full year, and the major wildfire smoke event is obvious with the big jump with reds and a purple. Most of the Puget Sound looked very similar to this curve.  The annual average was over 10, but didn't hit 12.

By comparison,  the smoke from the Bolt Creek Fire this year is more localized with the US2 corridor and the Cascades getting a much bigger hit. Marysville hasn't had as big of jump as 2020, but has been moving up faster in the last two weeks. North Bend shows one of the biggest recent increase of all of our network, but it is still below the 2020 spike. Assuming our typical PNW fall weather eventually returns, our curves will flatten out and we should still be under 10 ug/m3 for most areas. That said, some days and some places can be still be UNHEALTHY or worse for the next week or so, so people still need to be ready to take some precautions until the fires are really out for the winter.