Third time is definitely not a charm on this one... Another plume of smoke, mostly from the Bolt Creek fire, pushed west over the north Seattle/Snohomish county area overnight and early morning. It started off a bit above the ground, as can be see from our vertical lidar (smoke radar-like) in Marysville. See the figure below. The smoke is the dark grey and yellow from about 500 m high up to 2000 m, starting 10 or 11 pm and continuing to the right on this figure. The yellow shows some especially thick plumes... 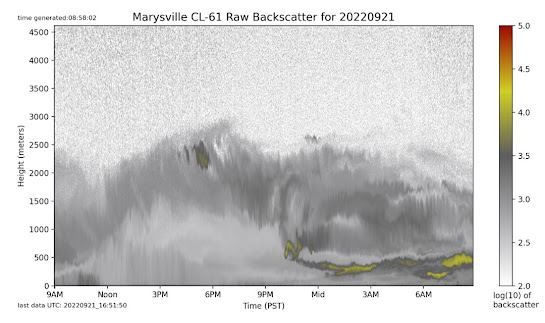 We can see the situation in the morning from the satellite, the smoke has spread over much of the central Puget Sound. Though apparently not all has mixed down to the surface. 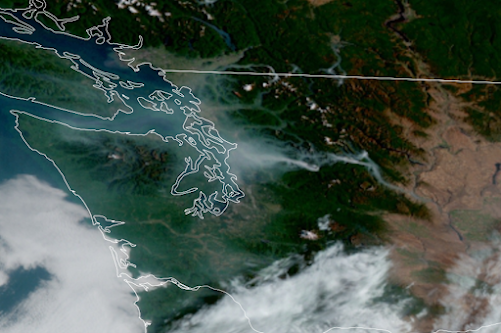 All of this has led to some fairly high and sharp spikes in fine PM for Snohomish County and west/northwest King County as of about 9-10 AM. Many areas are seeing Unhealthy for Sensitive Groups (USG) and at times, Unhealthy AQ. Here's a recent screen grab (10 AM) from the PSCAA sensor map: 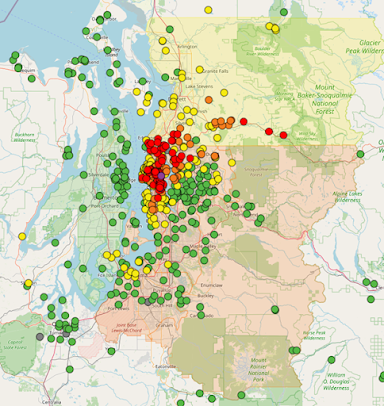 We're expecting a decent westerly and northwestly to pick up this morning and into the afternoon. This should push the smoke back to the east and south, and clear out the area by late afternoon. I'm hoping  there's not too much more smoke aloft or upwind of us so the clearing can be fairly rapid, but it's tough to tell.

So, if you're in the USG or Unhealthy areas, limit time outside and avoid strenuous activities. When you're inside, keep windows and doors closed and find a way to filter your indoor air. See this guidance for more information.