Most smoke-impacted areas in Washington during summer 2021

As we await potentially season ending rains this weekend, this may well be our last post for summer 2021. So we focus on the two areas most impacted by smoke in summer 2021: portions of Yakima and Okanogan counties.

Fires in the Methow Valley led to poor air quality in Okanogan county earlier in the season than in previous years. The Schneider Springs fire in western Yakima county has been causing trouble since August 4. Here's a plot of all monitors in each area averaged together on a daily basis. We've included low-cost PurpleAir sensor data by adjusting them with the same correction factor as in the map above. 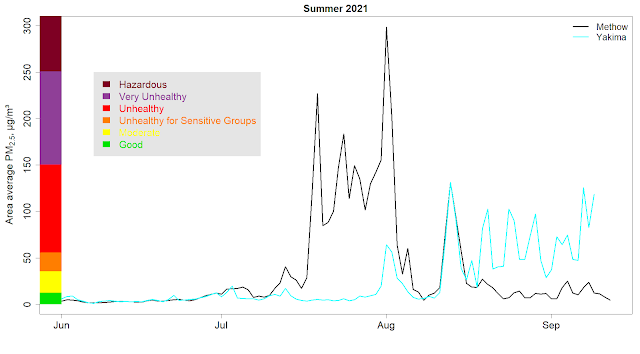 To visualize the summer average of PM2.5 in each of the communities, we constructed an interactive map by fusing satellite data, air quality model data and all available monitoring data. We used the same monitors as above, but only included PurpleAir sensors which reported at least one month of data. More geeky details are available on request.

Click on the image below to view the interactive version. 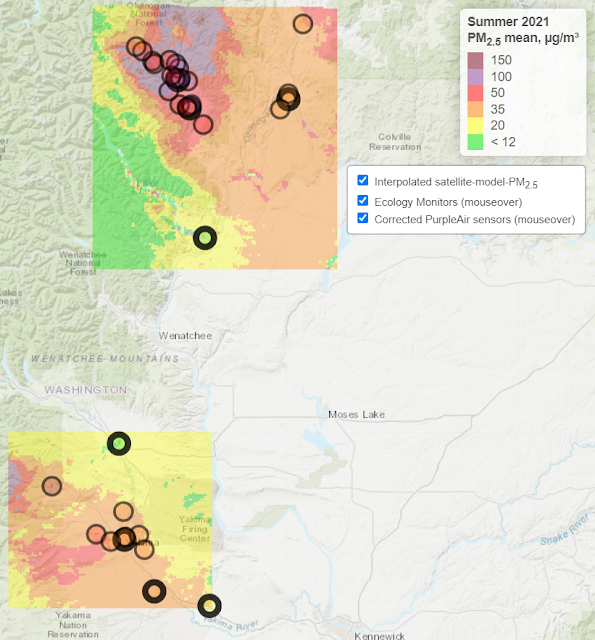 Disclaimer: this map is for informational purposes only. It does not establish legal culpability nor should it be used to distinguish air quality differences between your front yard and back yard.

You can see where the most impacted areas were: right by the fires and all the higher terrain where plumes hit, followed by nearby valleys where smoke drains into. Since these are approximately 3-month averages, they're not directly comparable against the daily and annual federal PM2.5 standards of 35 and 12µg/m³ respectively.

Not to trivialize smoke that plagued other parts of the state, but the sad reality people in these two areas faced was worse.