Western WA: enjoy the nice sunsets courtesy of CA smoke. Eastern WA: lift up your heads and breathe again, your deliverance is here to stay.

For a week at least.

Deliverance from wildfire smoke, that is.

Time to start playing your favorite songs about clear skies and bright sunshine.

An approaching weather system is dragging smoke from northern CA fires over the region and very little is expected to mix down. Don't expect anything worse than Moderate between now and tomorrow, after which everything gets shunted further east. Should have a nice sunset today.

Relief commenced on Monday afternoon and yesterday's weather system helped knock back fires even further. Not by just pushing it off to BC, but by mixing it through a deeper layer. Here's a timeseries of all eastern WA fine particle monitors showing how levels dropped starting Monday at sites closest to fires and then more consistently yesterday. This is an 8-hr  running average to smooth out the noise. Mostly Moderate air in eastern WA right now, except some Unhealthy for Sensitive Groups closer to the Methow valley fires. 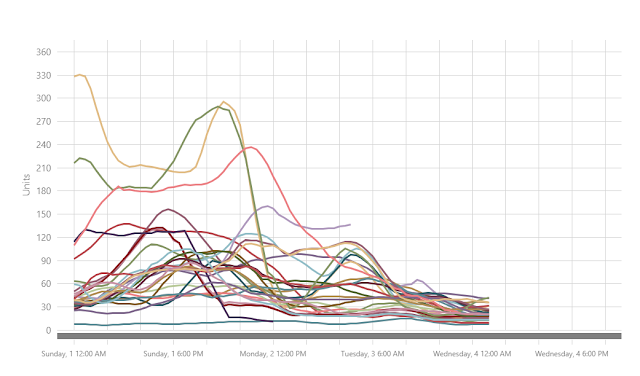 Yesterday's thunderstorms did spark off a few new fires. Even they're mostly relatively small, winds tonight are expected to 'fan the flames' so this bears watching. New fire starts are also of concern: 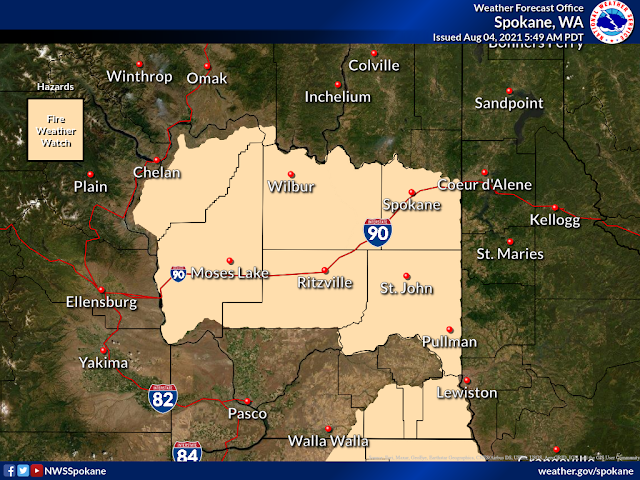 The big change starts Thursday with cooler temperatures, winds and a good deal of wetting rain dumped right on the fires. Post rain, cooler temperatures and good ventilation conditions are expected for several days, so there does not seem to be any imminent danger of returning to what we saw last weekend. Mostly Good to Moderate air and no worse than USG closer to fires.

Ecology's 5-day smoke forecast is currently over-estimating concentrations, and this is an artifact of how certain machine learning models struggle with characterizing big weather transitions. The model solutions are weighted most by the previous day's observed smoke levels. Further, the smoke and cloud cover over the last few days prevented satellites from detecting ongoing fires and this led to an under-estimate of smoke conditions a few days out. These errors don't offset each other. The forecaster community is working to identify solutions to these and other issues, so smoke forecasts will continue to be evolving products.

Here are the satellite- derived PM2.5 concentrations for Monday & Tuesday. Notice the data gaps in areas where cloud cover or smoke is obvious. And the stark transition as you cross the Cascades. Mountains holding smoke at bay. 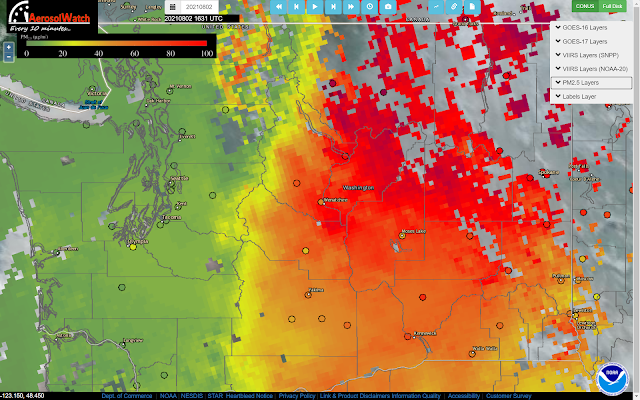 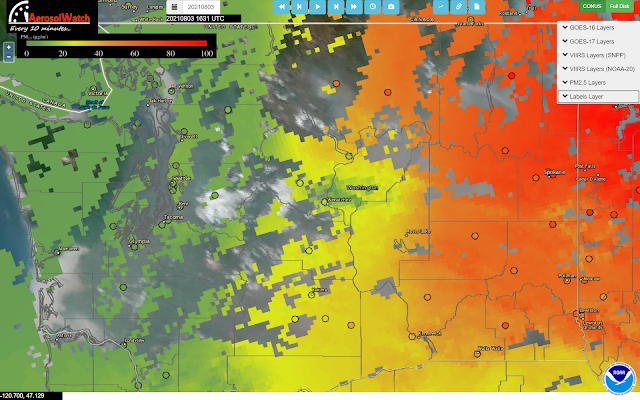