Will smoke start to clear by Friday? Yes ± maybe

Wednesday's air quality conditions remained pretty close to a repeat of Tuesday. Thursday will plagiarize from Wednesday. There is a reasonable chance that gradual improvements in western WA will commence by Friday afternoon. Eastern WA will have to wait a little longer. More on all that further down.

Ground level ozone (aka smog) concerns (which we blogged about recently) persist, exacerbated by wildfire smoke. Locations in the Cascade foothills communities of east King and Pierce Counties and the Tri Cities recorded high levels of ozone this past week. An air quality advisory for smog has been issued.

However with north-northeast winds likely to let up for a while, Thursday will hopefully be the last day in a long stretch of high ozone days. At least for now.

About that reasonable chance: here are the forecast windspeeds shown by all the main weather models, for Seatac airport from now through 5PM on Sunday (times are in GMT, so subtract 7 hours for PDT; shaded times are overnight hours). The thick black line is the average of them all (known as the "ensemble mean" in geek speak). 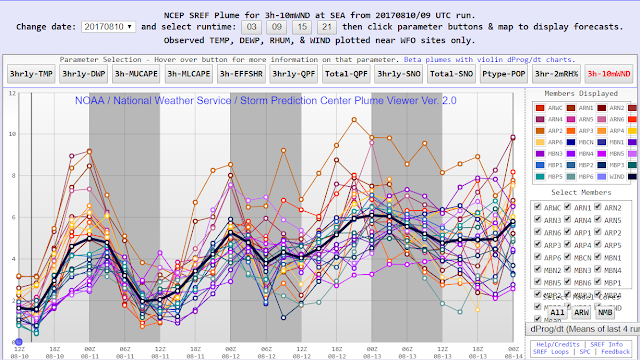 Because many models agree that the slight uptick in speeds overnight Friday will remain through Sunday, we're more confident that smoke will start to disperse by then. Winds wont be terribly strong, so clearing will not be rapid.

The same plot for Spokane airport suggests that eastern WA will have to wait an extra 12-18 hours before clearing commences. 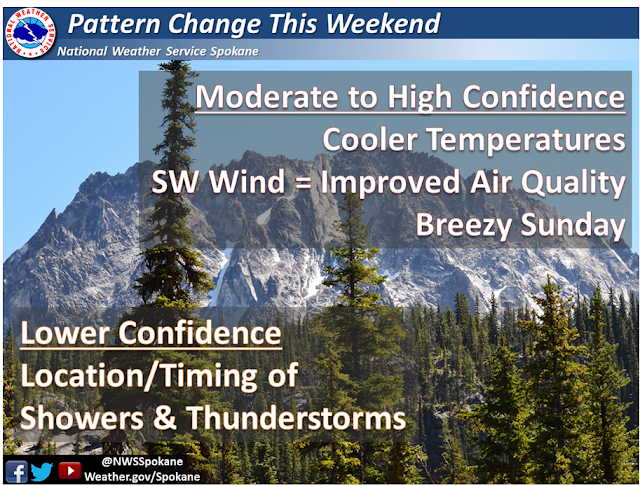 And, none of the major models are suggesting a return to this ridging pattern within the next week. Meaning BC wildfire smoke is unlikely to blanket the state anytime soon. Just yet. We hope.