West side forecast
This morning's satellite image shows smoke from the Jolly Mountain fire gradually closing in on Seattle. 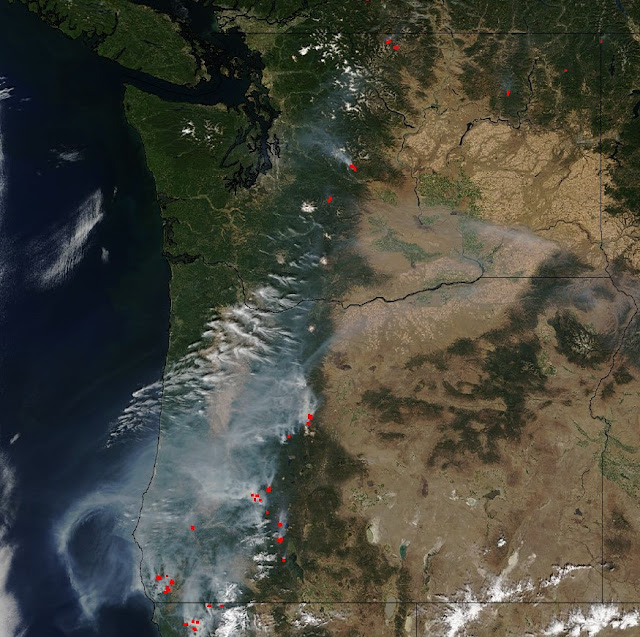 Most of it is staying aloft for now but will likely mix to the surface between now and Monday night. Expect air to be Moderate to Unhealthy for Sensitive Groups from about North Bend to West Seattle and down to Tacoma or Olympia. Areas north of Seattle should remain mostly Good.

West winds will help clear things out by Tuesday but the respite may be short lived. There is also a Red Flag Warning for the Cascades until Monday night so please stay tuned.

Eastern WA forecast
Several fires continue to pump smoke into the Columbia Basin and most monitors around the Basin rarely saw anything better than Moderate air all weekend. As the satellite image above indicates, some California/ Oregon smoke that initially blew over the Pacific ocean is starting to stream over southern WA. Most of this smoke is expected to remain aloft. In general, air quality across a lot of eastern WA isn't expected to be much better than Moderate until Tuesday. Cle Elum could see intermittently Unhealthy conditions due to the proximity of fires.

Have a look at this interactive StoryMap showing how wildfire smoke episodes impacted different areas in the state since 2012. Clicking on circles will display more site- specific data. The main take home messages are: