Smoke from the Irving Peak and White River wildfires (NW of Lake Wenatchee) drifted across the Cascades early this morning, with moderate impacts in Darrington and other inland locations in Snohomish county.  That smoke should clear out later today and winds are not expected to carry over any more smoke in the near future.  Residents near Cashmere, Wenatchee, Leavenworth, and Chelan will continue to see moderate to USG smoke impacts over the next few days, as westerly winds will prevail.

Meanwhile, the Diamond Watch wildfire (NE corner of WA) has been sending moderate smoke south into Pend Oreille and Spokane counties.  This may clear up a bit today but Spokane-area residents should expect another moderate smoke push tomorrow morning too.  On Saturday, winds should shift and push Diamond Watch smoke north instead.

At moderate AQI, some people can be especially sensitive to particle pollution and should take steps to protect their health (limit time outside and avoid strenuous outdoor activity). Sensitive groups should watch out for symptoms.

All of the active wildfires in our state are under 1,000 acres, so smoke impacts haven't gotten too bad.  However, there are several new emerging fires from recent lightning strikes.  Plus this weekend will be hot, dry, and gusty.  So, there is potential for new and active fires to grow considerably over the next couple days.   The main risk of new significant fires appears to be in north central Washington.

Don't get beat by the heat over the next few days in Central and Eastern WA!  Hydrate, find shade, and keep cool! 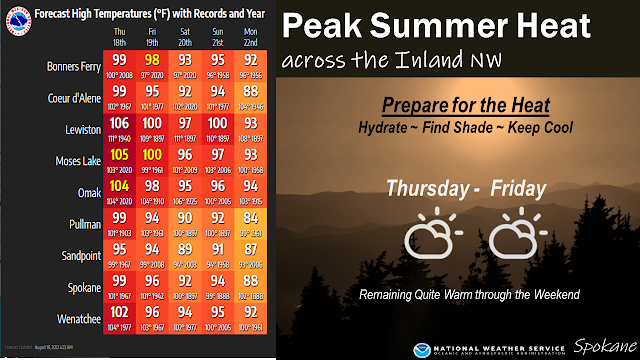