It wasn't us. It was them!
Well, mostly. Folks around Leavenworth, the Puget Sound lowlands, and southeast Washington have been breathing moderate amounts of smoke over the last day or two. There has been some prescribed burning approved recently and a wildfire outside of Leavenworth which may be contributing locally to the higher smoke values, but most of the smoke seems to be drifting in from Oregon and Idaho.

East winds helped drag some smoke from Idaho across the Palouse and the Lewis- Clark Valley. In western Washington, south winds brought in some smoke from wildfires near Mount Hood in Oregon. In most cases, air quality degraded to "Moderate".

Here is the satellite image over Washington, taken on Monday morning. Notice the Idahoan smoke coming down the Clearwater river valley. South winds picked up later in the day and brought in more smoke from Oregon. In addition there are areas of smoke in central and western Washington, partly caused by prescribed burns. 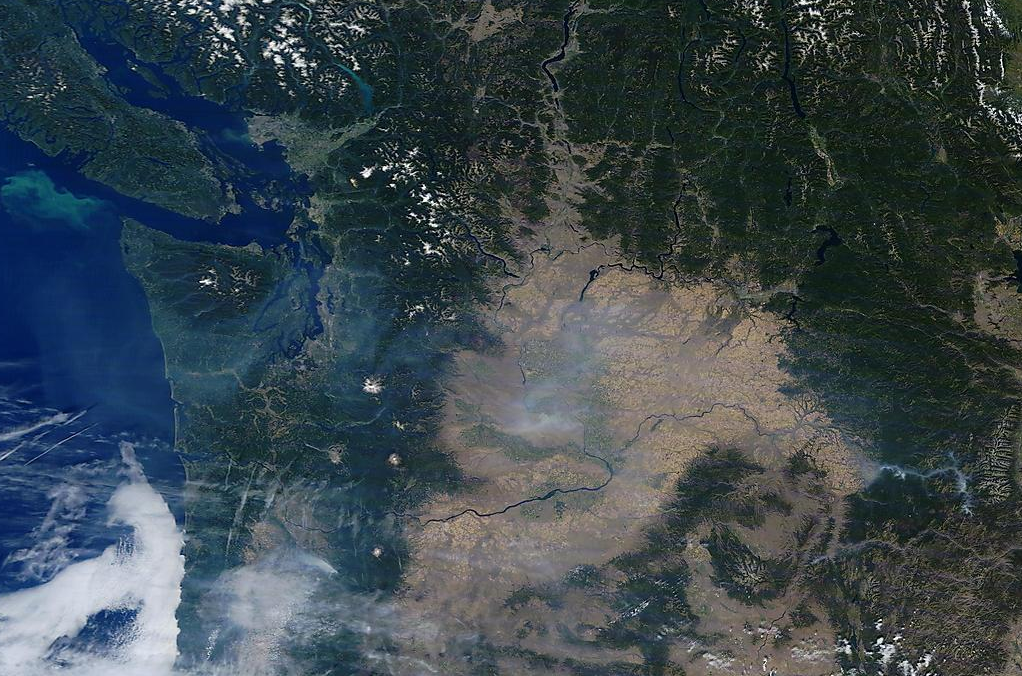 Forecast
The picture is likely to remain the same through this evening, after which winds turn a bit more westerly, and become southwesterly by Wednesday. Western Washington will see less Oregon smoke  starting Wednesday morning. But southwest winds mean smoke from Oregon is likely to impact cities in a line from The Dalles, OR through Spokane, at least through Thursday.

The Palouse will see some relief from Idahoan plumes before Oregonian plumes show up. Air quality is likely to hover between Moderate and Unhealthy for Sensitive Groups.

Stronger winds are expected on Thursday and this is likely to disperse smoke more. Things calm down as a ridge builds from Friday through the weekend bringing us nice weather statewide and also poor smoke dispersion. We are not likely to see a lot of smoke from neighboring states transported over Washington, but cities closer to the fires will be impacted. Some daytime clearing is expected.

In addition, smoke from various prescribed burns could bring some smoke to different parts of the state.

Forecast will be updated as needed