Light smoke above most of the state, gradually clearing through Saturday

Light winds are keeping smoke from multiple sources swirling over much of the state, with most of the smoke staying aloft. The July Complex fires in northern CA are sending smoke our way, as are smaller local and regional fires. While there has been some Siberian smoke visible on satellites over Alaska & British Columbia, there is no evidence to suggest any of that has dropped down into Washington.

On-shore winds will gradually pick up today and start the slow process of flushing out smoke (read: push it into Idaho, Montana and BC). But that flushing process is fraught with its own dangers as reflected by the Red Flag Warning issued by the National Weather Service in Spokane. 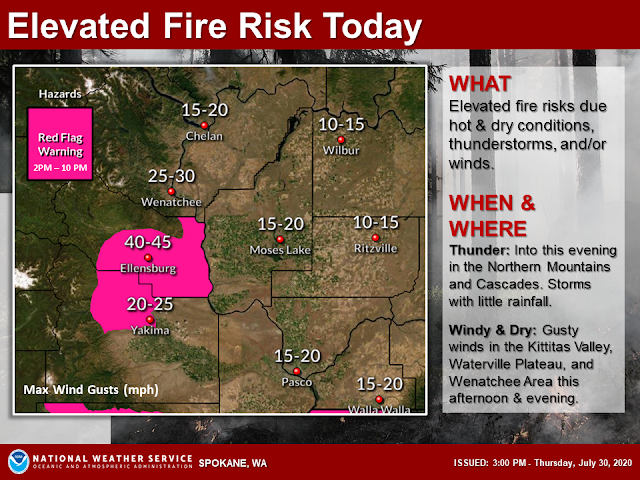 The air quality forecast map shows conditions in eastern WA will be no worse than Moderate through Saturday, although areas very close to fires may see poorer air.

We will start the following week on a clean slate but fire weather concerns return on Monday despite a  slight cool down. Not the time to let our guard down.