Eastern WA air quality and forecast
Spokane is the meeting point for smoke from eastern WA fires exiting the state. Several area monitors recorded Unhealthy air for some hours overnight. Here's what the satellite picture looked like just before sunset.

After dragging some smoke into the Columbia Basin this morning, winds will redirect it all at Spokane overnight today. Expect areas to reach Unhealthy for Sensitive Groups and Unhealthy at various times of the day Tuesday & Wednesday. In general, worse air at night and some relief during the afternoons. The National Weather Service in Spokane issued an Air Quality Alert to cover this situation. 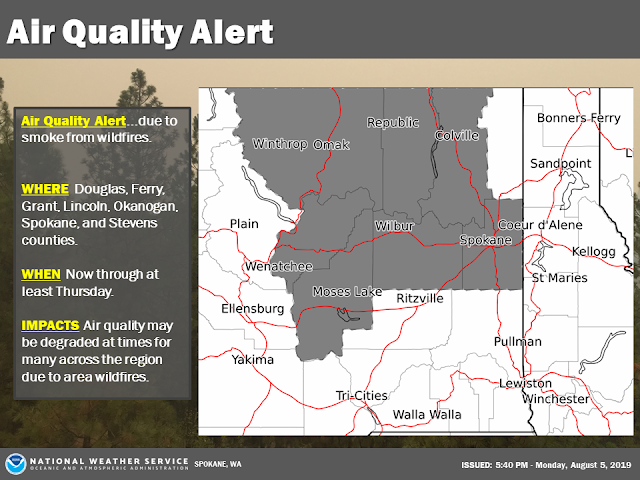 Western WA
Light smoke from distant sources will add a wee bit of fine particle pollution to the urban mix, leading to a few Moderate hours in the Seattle area through about Wednesday evening. Barring impacts from localized fires, expect mostly Good air.

Ozone
Ozone is not released directly by sources but is formed when certain gases react together under the right weather conditions. Downwind of the Seattle- Tacoma metro area, ozone levels were Moderate yesterday and are expected to touch USG this evening. Kennewick might also see some Moderate levels Tuesday & perhaps Wednesday. More info on reducing ozone levels and protecting yourself can be found here.