Fine Particle monitors this morning show Unhealthy air in Wenatchee and Ellensburg, Unhealthy for Sensitive Groups in North Bend, and Moderate air in Leavenworth, Darrington, Clarkston, Aberdeen and Shelton. All other monitors are reporting Good air. Data from the USFS temporary monitors have not been reported since Thursday afternoon.
Most areas saw some clearing last afternoon. In western WA haze could be seen overhead but did not mix down to the surface in appreciable amounts. Satellite imagery shows smoke well over Puget Sound, the San Juan islands and the Pacific coast. Smoke from Idaho and Montana wildfires was clipping the extreme southeastern parts of the State. Expect several areas south of  Everett to sense some smoke when the nocturnal inversion breaks this morning. Similar smoke behavior can be expected in and around Shelton, Aberdeen, Longview, Vancouver, Clarkston and Walla Walla. However winds will remain strong enough (in fact
there is a red flag warning for dry east winds across the Cascades and northwestern Olympic Peninsula, as these could accelerate fire growth through Sunday morning), so it is unlikely that air will deteriorate to worse than Unhealthy for Sensitive Groups in these areas. Stronger smoke impacts can be expected in communities close to fires however. Night and morning smoke followed by some afternoon clearing can be expected.
Not a whole lot of variation in the forecast over the weekend. Winds are expected to relax a bit further and be mostly terrain driven by Sunday. Mixing heights may reduce a little thanks to the subsidence inversion, but models don’t indicate widespread stagnation. I'd expect to see more yellow areas on the map (aka Moderate air quality) with some orange (Unhealthy for sensitive groups) at locations mentioned above. Areas closest to the fires however could see Unhealthy air.
The National Weather Service issued an Air Quality Alert for Douglas, Chelan and Kittitas Counties through noon Friday:
http://forecast.weather.gov/wwamap/wwatxtget.php?cwa=otx&wwa=air%20quality%20alert
There continues to be a burn ban east of the Cascade crest. The Governor’s proclamation http://www.governor.wa.gov/proclamations/pr_12-16.pdf allows for local fire departments to issue written permits that approve specific burning activities.  Please work with your local fire jurisdiction and your Ecology burn team staff to get the needed written authorization for specific agricultural burns. In some areas, air quality concerns or local fire danger may preclude burning during this extraordinary wildfire event.
Thanks

- when browsing the monitoring web page, click on the dots and you can then click on “View more information” to find out the latest hourly values (even if the dot is grey) 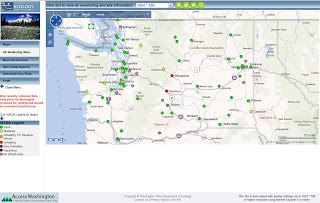